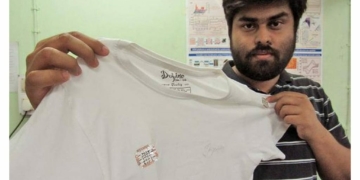 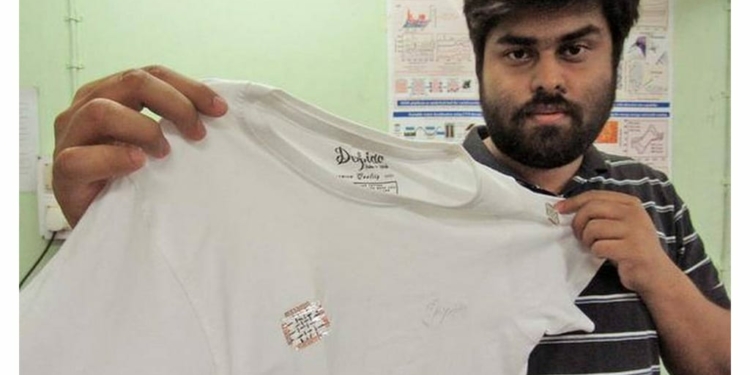 Researchers at the Indian Institute of Technology (IIT) Bombay have fabricated a wearable supercapacitor that can store and deliver large amount of electrical energy, exceeding other similar devices. The wearable energy storage device can be stitched on to any fabric and can deliver power ranging from microwatt to milliwatt. The energy stored in the device can power GPS location-based transmitters or a 1.8 volt LED.

“The idea is when the supercapacitor is integrated with a piezoelectric energy generator then it will become completely self-sustaining. And when stitched to the fabric, the supercapacitor can be used for powering GPS location-based devices or a LED lamp or even charge small electronic devices,” says Prof. Chandramouli Subramaniam. He is from the institute’s Department of Chemistry and the lead author of a paper published in the journal ACS Applied Materials & Interfaces.

Novel electrode
The electrode of the supercapacitor was fabricated by uniformly coating cotton yarn with carbon nanotubes (CNTs). The coating is done by dipping the yarn into carbon nanotube ink, where the CNTs are dispersed in water using a surfactant (detergent).

The coating converts the electrical insulating yarn into a metallic conductor thereby behaving like an electrode. “The yarns coated with carbon nanotubes exhibited a finite electrical conductivity,” says Prof. Subramaniam.

As the supercapacitor is targeting wearable and portable electronics, liquid electrolytes are out of the reckoning. So the researchers prepared a solid electrolyte film just 150 micrometre thick by mixing poly vinyl alcohol and potassium hydroxide in appropriate proportions.

“We stitched the solid electrolyte with CNT-coated yarn both vertically and horizontally. Capacitors were formed wherever the CNT wires criss-crossed each other and sandwiched the electrolyte,” Prof. Subramaniam says. “By increasing the number of stitches, and therefore, the number of capacitors, the amount of energy stored can be increased.” A 1×1 sqcm electrolyte will have at least a few hundred capacitors.

The researchers laminated the electrolyte film containing CNT wire electrodes to protect it. The laminated capacitors retained flexibility and sturdiness without compromising on performance and power.

Application
“Energy stored in just nine capacitors can power a LED of 1.8 volts,” says Mihir Kumar Jha from the Department of Chemistry at IIT Bombay and the first author of the paper. “Depending on the application, we can increase the number of capacitors made in a small area and integrate to increase the total amount of energy stored in the system.”

High performance
The laminated supercapacitor demonstrated unchanged performance even when subjected to extreme and harsh mechanical testing — striking repeatedly with a hammer, complete flexing, bending and rolling, and washing in a laundry machine in the presence of hot water, detergents and high spinning action. “This is possibly the first demonstration of a wearable device that can withstand rigorous washing conditions,” says Jha. Moreover, being lightweight, it does not hinder user movement in any way.

featured image: We can increase the number of capacitors made in a small area and increase the total amount of energy stored, says Mihir Kumar Jha.  Image Source: IIT Bombay