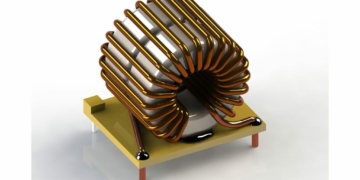 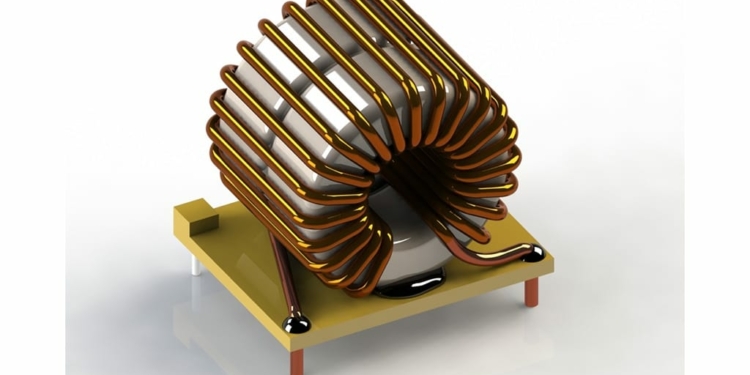 by Arturo Mediano. Resonances in components are a well-known topic for electronic designers when working in high frequencies (e.g. EMI/EMC). Do not forget to test your components with an impedance analyzer, especially if they are custom magnetic components.

First, when learning circuit theory fundamentals, you work with capacitances, inductances, resistances, etc. Then, when trying to build your circuits you replace those ideal elements with capacitors, inductors, resistors, etc.

If the real component is equivalent to the ideal element, the circuit will work as expected from theory. But, if the component behavior is not ideal you can obtain unexpected results and you need to find a more complex model for it.

In Figure 1 you can see a typical plot (measure) of the impedance of a capacitor and an inductor. The response of a real capacitor is not ideal (Figure 1, left) and, at self-resonant frequency SRF=1.18MHz (phase 0º) the capacitor switches from an ideal capacitive response (1/ωC) to an inductive response (ωL) because the parasitics in the component.

Figure 1: Impedance of a capacitor (left) and an inductor (right). (C) A.Mediano.

The response of a real inductor is not ideal (Figure 1, right), at self-resonant frequency SRF=1.87MHz (phase 0º) the inductor switches from an ideal inductive response (ωL) to a capacitive response (1/ωC) because the parasitics in the component.

Figure 2: Typical model for a capacitor (left) and for an inductor (right).

A very interesting case is found in many inductors with core as the ones used in power electronic circuits with stacked cores and multi-wire cable (Figure 3): transformers, power factor corrector circuits, EMC filters, etc. 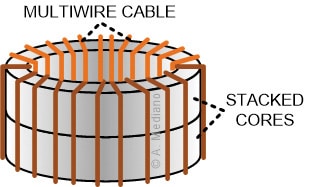 Because for EMI/EMC, inductors are used many times in series (low pass filters, PFC inductor, etc.). The idea is to offer low impedance at low frequencies and high impedance at high frequencies.

If you do not measure the response of your inductor in your impedance analyzer, it will be difficult to understand why the emissions are especially bad at those frequencies.

The situation can be solved in several ways, for example, changing the inductor, replacing the cores with cores with losses in those frequencies (resonances will be with low Q), to modify the winding strategy, etc.

My final advice: test your inductors with stacked cores to compare emissions with their resonant frequencies. Sometimes you will be surprised with that comparison.

Arturo Mediano received his M.Sc. (1990) and his Ph. D. (1997) in Electrical Engineering from University of Zaragoza (Spain), where he has held a teaching professorship in EMI/EMC/RF/SI from 1992. From 1990, he has been involved in R&D projects in EMI/EMC/SI/RF fields for communications, industry and scientific/medical applications with a solid experience in training, consultancy and troubleshooting for companies in Spain, USA, Switzerland, France, UK, Italy, Belgium, Germany, Canada, The Netherlands, Portugal, and Singapore. He is the founder of The HF-Magic Lab®, a specialized laboratory for design, diagnostic, troubleshooting, and training in the EMI/EMC/SI and RF fields at I3A (University of Zaragoza), and from 2011, he is instructor for Besser Associates (CA, USA) offering public and on site courses in EMI/EMC/SI/RF subjects through the USA, especially in Silicon Valley/San Francisco Bay Area. He is Senior Member of the IEEE, active member from 1999 (Chair 2013-2016) of the MTT-17 (HF/VHF/UHF) Technical Committee of the Microwave Theory and Techniques Society and member of the Electromagnetic Compatibility Society