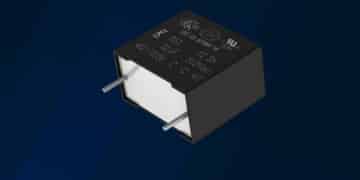 Currently, available solutions comparable to the R53 series have either larger dimensions or require capacitors in parallel in the design. With a rated 310Vac at 50 or 60Hz, this series is intended for use in Class X2 line-to-line applications or in series with the AC mains. R53 is well-suited for AC/DC converters in onboard chargers for xEVs, smart grid hardware, EMI filtering in Variable Frequency Drivers (VFDs), LED drivers, and high energy density applications such as capacitive power supplies. R53 series features a metallized polypropylene film encapsulated in a self-extinguishing resin and a shell that meets UL 94 V-0 requirements. The metallized polypropylene film combined with an internal parallel construction provides self-healing properties to prevent catastrophic failure and extend service life.

Electronic component miniaturization and operation in harsh environmental conditions are growing in applications, such as onboard chargers, smart electric meters, capacitive power supplies, including connection in series with the mains, motor drives, wind, and solar inverters. R53 capacitors are AEC-Q200 qualified, designed for harsh environments, and meet the highest standards of reliability required for smart grid hardware, often located in limited access areas where regular service is not available.