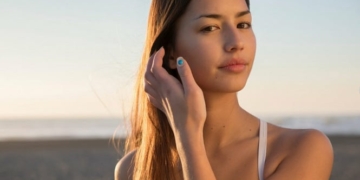 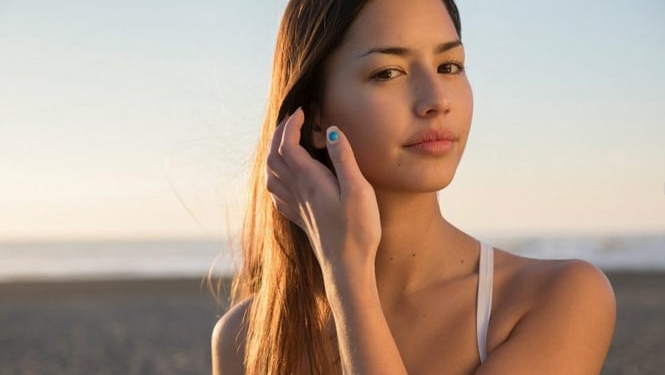 Just about every wearable has the same flaw: The battery doesn’t last. Batteries simply aren’t powerful enough to enable the design of a svelte Apple Watch that can run for more than a day between charges. That might be fine for a single prized object on your wrist, but it can’t possibly scale to the industry’s visions of smart clothing, shoes, and jewelry.
The UV Sense, however, is a wearable designed around an amazing premise. You never charge it, and there’s no battery inside. It sticks right to your body and runs for up to four weeks, powered by the same entity it’s sensing: sunlight.

Developed by L’Oreal in conjunction with the wearable tech company MC10 and the design studio Fuseproject, the UV Sense sticks onto a nail like a nail applique, and it measures the UV rays that your body is being subjected to at any given moment. To read this exposure  data, you sync the Sense with your smartphone to via NFC (near field communication) technology, the same thing used for those tap-and-go smartphone payments. The product’s digital interface will be shown at another data.L’Oreal released its first UV-tracking patch in 2016. It was the size of a Band-aid. It turned from white to blue over time, and to track exact UV exposure,  you had to photograph it with your phone. L’Oreal gave out one million free skin sensors it sent out to dozens of countries across the globe.

The UV Sense is smaller and more mindless to operate. From a technological stance, the UV Sense is built from almost nothing. It’s literally three components embedded in a drop of polymer: a sensor, a capacitor, and an antenna. The energy inside UV rays naturally activate the sensor, and their measurements are saved inside the capacitor. (Yes, capacitors store energy much like batteries, but rather than using chemicals to do so, they trap electric fields. The tradeoff is that capacitors can’t store much energy at all, but that’s not a problem for the low wattage of the UV Sense.) The antenna then transmits data to the smartphone–actually drawing its power from the smartphone’s radio signal itself.

Of course, the technology was only part of the challenge in building the UV Sense. It also required a sleek user experience and industrial design, which fell to Yves Béhar’s team at Fuseproject.

“We always imagine the time when technology would be more discrete,” says Béhar, who has worked on landmark wearable electronics like the Jawbone Up. “And we’re definitely a few steps further with UV Sense, as far as being that tiny.”

But just because something is small doesn’t mean it should be invisible. “There’s definitely a question of, when it gets that small, what do you do with it? Where do you put it? How do you not lose it. And how does it just become embedded in your activities,” says Béhar.

Fuseproject began by considering where on the body the UV Sense could live. On your face, it might be shaded by a ballcap. On your wrist, it might find itself covered in the shadow of a jacket. The hand–or more specifically, the nail–was the best, always-nude part of one’s body. An added bonus was that nails are hard and they don’t sweat, meaning the UV Sense’s adhesive bottom could stick on one’s person for weeks at a time.

“The nail is a really, really interesting area. Because for women, it’s cosmetic…[so we could] almost treat it like nail art,” says Béhar, who points out that the UV Sense will come in all sorts of differing designs. “We also thought, well, it may become an accessory, something you attached to a pair of sunglasses, or your watch, or you can add to a friendship bracelet. We made it versatile in a sense. Not everyone is going to put it on their nail, so you can put it on accessories when you’re out in the summer, and sun.”

Bigger picture, to Béhar: The UV Sense is a model for a type of wearable we really haven’t seen before. It’s a single-serve sensor that doesn’t need a battery. This minimal approach is the antithesis of an Apple Watch–which measures all sorts of biometrics and promises countless functions, in a way that Béhar likens it to a multitasking laptop computer.

It’s a feasible argument for the future of wearables–tiny, forgettable stickers we apply to wherever they’ll attach to our lives, to track only the bits of information crucial to our personal well-being. But does all of this effort really matter, considering that consumer data shows that many people tend to abandon their wearables within a few months of purchase? Maybe. In a trial run with its earlier UV patch. Namely, these UV sensors changed behaviors. 34% of users reported applying sunblock more often, and 37% reported that they stayed in the shade more. If such behaviors could stick over months or even years, it’s easy to imagine the compounded skin health benefit.

If you’d like to try the new product for yourself, the UV Sense will be available later this year for a yet-to-be announced price.