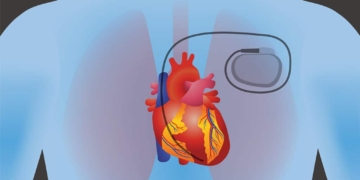 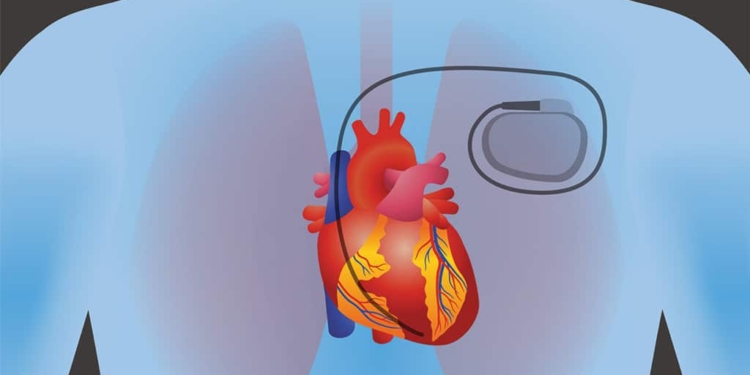 Surface-mounted passive components, like solid tantalum capacitors, are among the most critical parts in implantable devices, especially heart defibrillators. Due to the life-or-death nature of these devices, the government has strict regulations on their design and manufacture, requiring manufacturers to take measures to insure highest levels of quality, including full lot traceability, stringent process controls, process change notification mandates and long record retention. Not every manufacturer wants to or is able to participate in this highly regulated business.

Did you know that implantable devices make up the lion’s share (28 percent) of the market — $160 billion worth — for Class III medical devices, according to Global MedTech Market Development? Class III implantable medical devices undergo careful scrutiny by the FDA because they go inside the human body.

The key to meeting these stiff regulations for implantable devices is improving overall system reliability. For capacitors, this means improving reliability and reducing leakage current to its lowest level possible. Leakage and reliability are related and are affected by a number of other issues, which is why it’s helpful to have a basic understanding of tantalum capacitors.

Back to Basics
To appreciate the relationship between current leakage and reliability issues, one must first understand how tantalum capacitors are made. Both the construction and manufacturing details are fairly complex, and vary depending on the type of capacitor, but for now only the necessary attributes of implantable, low-leakage tantalum capacitors need to be considered.

Any capacitor consists of a cathode and an anode separated by a dielectric. What makes tantalum capacitors unique is a small pellet of tantalum that acts as the anode for the capacitor. This anode is covered by an oxide layer that functions as a dielectric, which in turn is surrounded by a conductive MnO2 cathode.

The tantalum pellet looks like a very tiny sponge. Its structure enables a high surface area for the dielectric, which means higher capacitance levels in a much smaller size than other capacitor technologies (see Fig.2.). 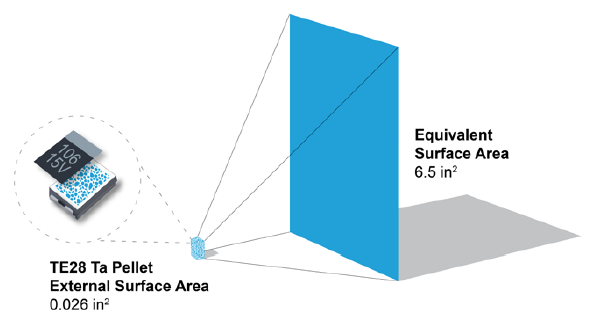 On the packaging side, there are options for traditional leaded configurations, but more recent technology advancements have seen the introduction of more size-efficient configurations.

Life sustaining devices such as defibrillators and pacemakers get their power from non-rechargeable batteries. The lifecycle of these batteries are expected to be 10 years or more. In addition to long life, implantable batteries must be as small and compact as possible, which can greatly limit their energy capacity. Effective power management is the only way to ensure a long battery life in these circumstances.

The primary culprit behind leakage currents is the presence of impurities in the tantalum capacitor’s dielectric layer. Traditionally, these capacitors were subject to burn-in conditioning and testing to identify parts with an unacceptable level of impurities. Today, statistical screening methods complement burn-in testing to ensure the highest reliability.

“The tantalum capacitor industry settled on Weibull burn-in and grading for quantifying quality and performance for various applications, not just medical,” explained Kevin Walker, business development manager of medical at AVX. “The Weibull grading process involves an 85C [sic] temperature burn-in cycle at up to 1.5 times the rated voltage.”

The Weibull grading test is an acknowledged technique that allows selection and reliability rating of solid tantalum capacitors. The Weibull burn-in, combined with statistical screening is very helpful to identify and remove components with unacceptable DC leakage (DCL).

DCL is a measure of efficiency in tantalum capacitors, an expression of the loss of power via current leakage through the dielectric. It is a measure of the quality of the dielectric, and thus the integrity of a capacitor. Implantable devices need the lowest leakage possible in order to extend precious battery life as long as possible.

As AVX improved it’s tantalum manufacturing processes over time, defect levels were reduced, and the early life failures assumed by Weibull grading were dramatically decreased. This led the company to explore alternative methods for burn-in testing. They found that a higher temperature of 125° C system burn-in at rated voltage or less, coupled with three-sigma statistical screening, was as effective as Weibull grading at removing failing components. Importantly, this optimized burn-in approach also provides a lower level of DCL and a more consistent distribution of DCL values than can be found elsewhere.

AVX patented the above approach as their “Q-Process,” which incorporated a number of design, process, screening and conditioning enhancements. The Q-Process gives a more normal DCL population with lower probability of component failures and a reduced number of intrinsic dielectric defects within each lot. It has helped to produce medical capacitors with the lowest DCL in the industry.

AVX has a unique quality process, known as the Q-process, for ensuring the lowest leakage and highest reliability of these critical capacitors. Learn more on the AVX tantalum capacitors web page.