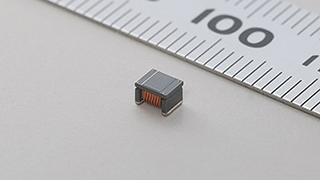 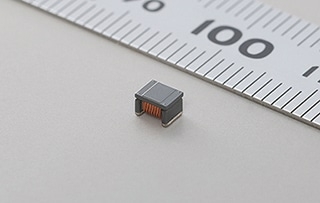 Murata Manufacturing Co., Ltd. has introduced the LQW32FT series for automotive PoC*1 circuits. This inductor provides high impedance in a wide band, with inductance of 47µH in the 1210-inch size (3.2 x 2.5mm). Mass production has already been started in November 2017.
PoC is increasingly used with SerDes*2 equipment in automotive applications in order to reduce weight, with a single coax cable transferring power and image data for an onboard camera. In former PoC implementations, large and small impedance several inductors were needed to handle the broadband signal at the circuit processor and to maintain high impedance in a wide band to separate the signal and power. The LQW32FT series allows a single inductor to replace the multiple components that were formerly necessary. This supports efforts to save space and reduce the overall size of a system, and to lower total DC resistance. This component also provides a 125℃ maximum for the usage environment temperature, making it suitable for automotive circuits.

The LQW32FT series is expected to be further expanded to support the high-speed signal transmissions needed by the market.

*1. PoC (Power Over Coax): A method for integrating a signal line and a power line in a single coax cable.
*2. SerDes (SERializer/DESerializer): Data conversion between a serial signal and parallel signal.