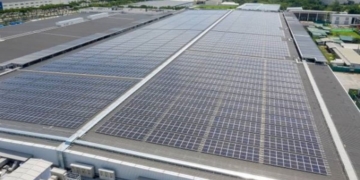 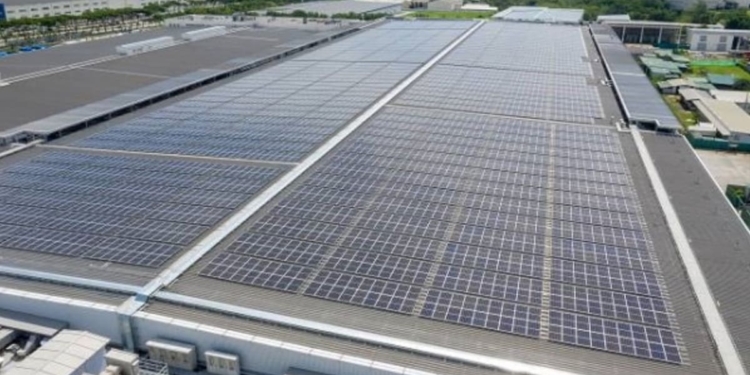 Philippine Manufacturing Co. of Murata, Inc., will be switching all electricity consumed at the plant to renewable energy from January 1, 2022.

We began by installing solar panels on the roof of the Philippines Plant’s production building in May 2021 to facilitate the use of renewable energy. The Murata Manufacturing Group is converting all electricity consumed in the group’s business activities into renewable energy to meet the goals of the RE100* global environmental initiative.

In recent years, the effects of climate change, such as rising sea levels and temperatures, as well as dramatic weather patterns, have become far more prevalent. To resolve this, it is important for us to work toward the realization of a sustainable society at a company level by implementing renewable energy and optimizing energy management.

The Philippines Plant will become the first overseas production site to switch over to using 100% renewable energy, thanks to the array of 6,768 solar panels that was installed in May 2021. It is expected that this will reduce CO2 emissions by an estimated 2,947 tons per year. There are also many volcanoes in the Philippines and it is known as the world’s second-largest producer of geothermal power. In addition to the electricity generated by the solar power array, we plan to utilize renewable energy that harnesses this geothermal power.

The Murata Manufacturing Group is committed to promoting the use of renewable energy at its domestic and overseas locations to combat climate change.

*RE100 is a global initiative that brings together the world’s most influential businesses that have committed to 100% renewable power. Companies from many different sectors participate in RE100, and the initiative has a total revenue of over US$6.6 trillion and operates in a diverse range of sectors. Together, they send a powerful signal to policymakers and investors to accelerate the transition to a clean economy. Led by international non-profit The Climate Group in partnership with CDP, RE100 is also part of the We Mean Business Coalition. The participation of Japanese companies in RE100 is achieved with the support of the Japan Climate Leaders’ Partnership (JCLP), which has been an official regional partner of RE100 since 2017.