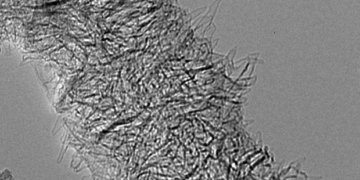 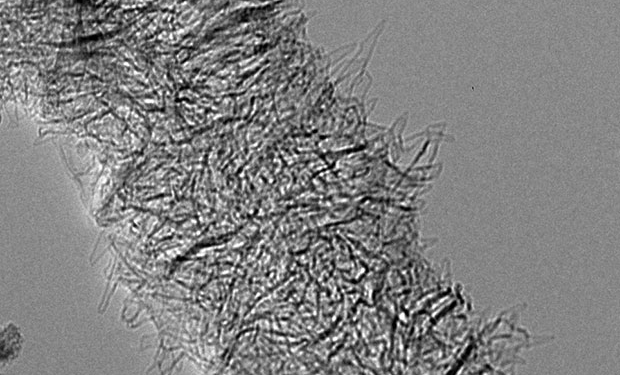 NEC says it has produced a new addition to its portfolio of nanomaterial discoveries—the carbon nanobrush. The company says the new material will boost the performance of batteries, sensors, and capacitors among other devices.

Like nanohorns, which NEC discovered in 1998, nanobrushes have disperse well in water and allow other molecules to stick to their surface, which makes them suitable for use as conductive additives and compounds. Despite the similarities between the two materials, the nanobrush boasts more than 10 times the electrical conductivity of spherical aggregate of nanohorns of the same length.

Nanobrushes are made from aggreagates of carbon nanohorns.
Not all details of the new material’s structure are known yet, but NEC believes nanobrushes radially gather during manufacture and are connected fibrously via a one-dimensional chemical bond at their center. Nanohorns, on the other hand, are produced in aggregates that form a spherical shape roughly 100 nm in diameter. A cluster of such nanohorns would contain gaps between them, hence the difference in conductivity.

Given the characteristics of carbon nanobrushes, NEC expects they will help improve the performance of a range of devices, including the speed of sensors, actuator response times, and the output of batteries and capacitors.

“In batteries, nanobrushes will be mainly used as conductive additives in cathodes and anodes to help increase electric current,” says Ryota Yuge, the discoverer of the new carbon material and a principal researcher in NEC’s IoT Devices Research Laboratories. “And because they help reduce a cell’s internal resistance, we estimate an increase of ten to 15 percent in a cell’s quick charge-discharge properties.”

That would make the material attractive for rapid charging of electric vehicles, NEC points out.

Yuge also expects to see nanobrushes used in sensors, especially those that undergo changes in shape, such as temperature and strain sensors, as well as sensors required for flexible electronics.

“Three-dimensional structures of nanobrushes can be formed in a sensor’s electrodes, so regardless of a sensor’s change in shape, current-voltage characteristics continue to show linear behavior,” he explains.

While there are no estimates available regarding improved sensor speeds, Yuge says capacitors incorporating nanobrushes can expect to see a two- to three-fold capacitance improvement.

Like nanohorns, nanobrushes can be manufactured at room temperature and under normal atmospheric pressure. Essentially, a high-powered laser is used to irradiate a mass of carbon, thereby making for a relatively efficient and low-cost process, says NEC.

However, this method produces both nanobrushes and nanohorn spherical aggregates simultaneously, and the researchers have still to establish an ideal method to separate the two materials. Controlling the length of the nanobrush is another challenge that needs to be dealt with. Nevertheless, Yuge says they will be ready to start sampling the material within the next twelve months. Nanohorns have been commercially available since 2013.