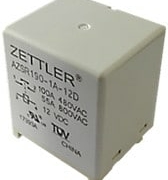 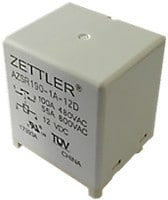 The proliferation of the marketplace for solar inverters keeps forcing engineers to do more with less. Among other things, that means switching more current and higher voltages on ever smaller footprint dimensions.

As a leader in the development of relays for solar inverter applications, ZETTLER Group continues to step up to the challenge, now adding the AZSR165 and the AZSR190 series to its AC solar relay line-up. With a footprint dimension of only 38 mm x 33 mm, the AZSR165 and AZSR190 bring high capacity switching into a compact PCB package.

With the new relays of the series AZSR190, ZETTLER is once again expanding the performance spectrum of the offered solar relays. The AZSR190 is a 1 pole relay rated for switching currents up to 90 A in the standard version and 100 A as high current version AZSR190T. It features a contact gap of 3.6 mm, 5 kV dielectric strength between coil and contact and a low holding power of only 310 mW. For details to approved loads at UL and TÜV please check the datasheet.