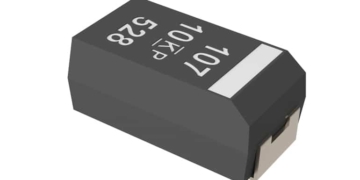 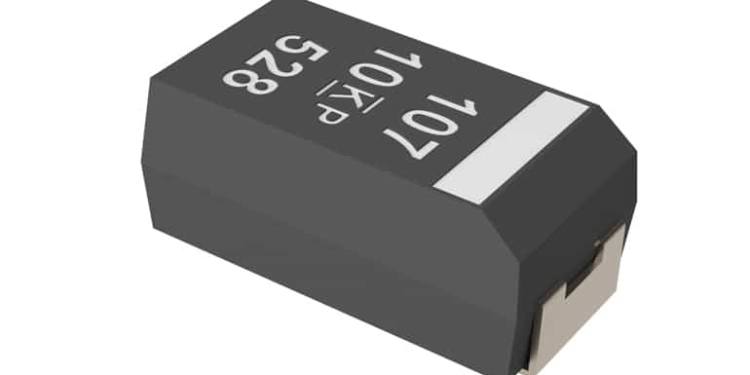 Today’s cars increasingly depend on electronic equipment such as infotainment and advanced driver assistance systems (ADAS) to meet important safety standards and customer demands. Although more electronic modules are needed on-board, little, if any, extra space is available to house them, so smaller and more space-efficient modules are always sought after.

As far as ICs are concerned, Moore’s law reductions in process geometry and the evolution of application-specific devices assist miniaturization by reducing the size and number of components on circuit boards. On the other hand, miniaturizing the many passive components, such as the capacitors needed on power-supply lines or at dc-dc converter inputs/outputs, is a tougher challenge.

Traditionally, ceramic or aluminum-electrolytic capacitors have been used for tasks like decoupling and power-supply filtering. Tantalum-electrolytic capacitors are known to have higher volumetric efficiency, and could enable the circuitry to be made smaller. Of the types that are available, polymer tantalum capacitors built with a tantalum anode, tantalum-pentoxide (Ta2O5) dielectric, and a cathode made from a conductive polymer hold several advantages over traditional tantalum capacitors featuring a manganese-dioxide (MnO2) cathode.

1. KEMET’s T598 series of polymer tantalum devices are specifically designed to meet the strict needs of the automotive market for applications such as ECUs.

The advantages of polymer tantalum capacitors include a benign short-circuit failure mode and lower equivalent series resistance (ESR). The low ESR minimizes energy losses and capacitor self-heating, and allows devices to handle large ripple currents without excessive thermal stress. The capacitor’s roll-off frequency is greater, too, due to the lower ESR, which enables polymer devices to maintain capacitance up to higher frequencies than MnO2 devices. Moreover, the polymer capacitor’s ESR has a low temperature coefficient, which helps ensure stable performance over the specified temperature range.

In addition, the recommended derating factor for determining the capacitor’s rated voltage in relation to the maximum application voltage—to minimize the tendency for devices to fail when voltage is applied—is in the range of 10-20% for a polymer capacitor. This compares with typical derating of 50% recommended for MnO2 capacitors. As a result, polymer capacitors effectively have a lower rated voltage, and therefore smaller size, than a MnO2 capacitor selected for the same application.

Polymer tantalum capacitors have become popular compact and efficient solutions for circuits such as high-performance dc converters in laptops and tablets, or power supplies in telecom switches and server rooms. However, several factors have prevented their use in attempts to miniaturize automotive power converters. When subjected to tests specified by the AEC-Q200 automotive quality standard, polymer tantalum capacitors are unable to pass the high-temperature exposure, humidity, and operational-life tests.

Regarding the high-temperature tests at 125°C, prior knowledge of conductive-polymer behavior when exposed to air at elevated temperatures suggests that degradation is due to diffusion of oxygen through the capacitor’s epoxy encapsulation and at the interfaces between the leadframe and the epoxy. The resulting oxidation reduces the conductivity of the polymer layer, increasing the capacitor’s ESR and dissipation factor (DF).

The humidity tests are performed at 85°C/85% RH (relative humidity) with dc bias applied up to the rated voltage for 1000 hours. It’s worth noting that other industries such as telecommunications are also starting to request 85°C/85% RH qualification. This may be driven by data analysis from tests on other components, which suggests that surviving 85°C and 85% RH for 1000 hours is equivalent to a real-use lifetime of 5-10 years in the target environment.

The humidity test led to increased leakage current, mainly because of moisture adsorption in the capacitor’s encapsulation and cathode layers. Water adsorption is known to occur in polymeric materials at high levels of humidity, and elevated temperatures accelerate the process.

The adsorption facilitates ionic migration of metals such as copper from parts of the leadframe that are exposed during manufacturing processes, including welding of the tantalum anode wire. This metallic migration can result in increased leakage current or, in extreme cases, short-circuit failure of the device. The ingress of moisture could also result in mechanical damage to the device.

The combination of innovations enabled the development of T598 series of polymer tantalum capacitors, which can withstand the 85°C/85% RH dc-biased test for 1000 hours. The devices are also able to withstand the non-bias high-temperature exposure and dc-bias operational-life tests at 125°C for 1000 hours.

In addition to the AEC-Q200 tests, capacitors must also pass electrical tests, such as load-dump tests, to be approved for use in automotive modules. Load-dump tests simulate the overvoltage transients that can occur after sudden disconnection of the vehicle battery while the alternator is generating charging current and other loads are connected to the alternator circuit. Sudden battery disconnect may be caused by a loose connection, corrosion, or deliberate removal of the battery.

Individual car manufacturers have established their own specifications for the test pulse. Many are based on the test pulse defined in ISO 7637, which standardizes an overvoltage pulse, assuming no surge suppression components are in the circuit. Of course, manufacturers apply proprietary suppression, and therefore need to adapt the ISO 7637 pulse to be in accord with the electrical environment in their own vehicles.

While the ISO 7637 pulse specifies a peak (unsuppressed) voltage of up to 87 V, manufacturers are known to specify various levels of suppression. Some of the limits are as low as 27 V, while other manufacturers tolerate a larger peak pulse voltage in the region of 45 V. Figure 4 shows a sample load-dump test waveform as specified by a major car manufacturer.

The electrical parameters of T598 capacitors have been measured before and after undergoing load-dump tests as specified by individual car makers. The capacitance, dissipation factor, ESR, and leakage current have all been shown to remain inside the published specification after completion of the tests.

Technical barriers have prevented designers of automotive modules and power supplies from taking advantage of the space savings that tantalum capacitors already bring to equipment such as consumer mobiles. Although polymer tantalum capacitors have eliminated drawbacks of “classic” tantalum capacitors with the MnO2 cathode, they have hitherto been unable to pass all of the AEC-Q200 environmental tests and manufacturer’s electrical tests such as load-dump testing.

With the arrival of devices like T598, the marketplace should expect the emergence of new and more space-efficient automotive modules that take advantage of the inherently volumetric efficiency and performance of tantalum electrolytic capacitors.