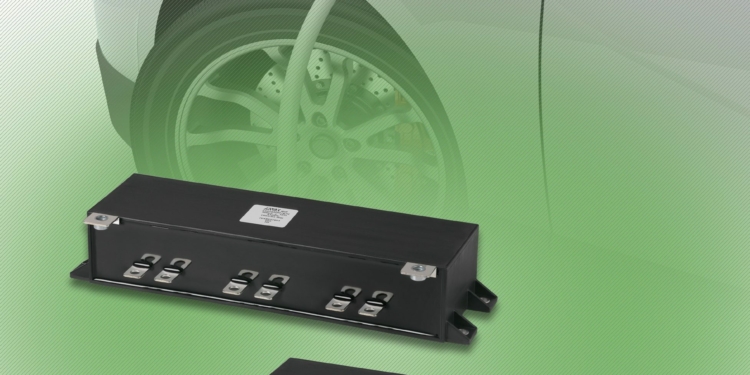 Automakers around the world are actively anticipating the decline of internal combustion engine (ICE) models and the rise of clean energy fleets comprised of electric, hybrid electric, and plug-in hybrid electric vehicles (EVs, HEVs, and PHEVs). Due to the steadily increasing popularity of clean energy automotive technology over the past few years, design engineers have already established a solid powertrain foundation for these vehicles. However, this market is expected to continue enjoying steady global growth worldwide for many years to come, and one of the primary reasons behind this projected growth is the expectation of significant technology advancements that will provide these vehicles with higher power density and improved performance, likely in line with government mandates expected to directly impact the power electronic systems of these vehicles.

Figure 1. Metallized polypropylene film segmented into a mosaic design (left) and an electrical schematic illustrating how the segmented film operates during the controlled self-healing process

The clean-energy vehicles of the future are expected to be just as reliable as current ICE models, and to provide range and safety features similar or equivalent to those of modern-day fuel-based vehicles. Currently, that’s not often the case. To fulfill these expectations, inverter manufacturers and OEMs will have to develop small, high-power, lightweight, and high-performance inverter designs capable of safety propelling these vehicles in a similar fashion to ICE vehicles.

The achievement of the smaller, more advanced wide bandgap (WBG) inverters that this newer market demandsto compete with experienced ICE technologyat competitive costs relies on advanced passive and active power electronics. Components like the DC filtering capacitors used between batteries or generators and inverters to convert the DC voltage into AC drive power will have to shrink down to the smallest size possible while remaining safe, reliable, and effective.

Advanced power film capacitors with controlled self-healing technology are one of the power electronics solutions that future EV and HEV engineers can rely on to meet the stringent size, weight, performance, and zero-catastrophic-failure reliability criteria of this demanding market.

One of the primary advantages of film capacitors is their ability to overcome internal defects, or to exhibit self-healing capabilities. The dielectric films used in DC filter capacitors are coated with a thin metallic layer. If a defect occurs, this metal layer evaporates, isolates the defect, and effectively heals the capacitor.

Initially, this metallic layer was applied to the whole of the film. This approach to the self-healing process is effective in low-energy applications, but proves insufficient in high-power applications with high reliability standards. In 1979, AVX developed the first film capacitors with a controlled self-healing process by applying the metallic layer to the film in small patterns, rather than all over. This resulted in safer and more controlled power film capacitor performance, and allowed these products to be employed in higher-power applications.

Controlled self-healing capabilities are achieved through the segmentation of the metallized film. This segmentation divides the total capacity into elementary cells — up to several millions per capacitor — that each act as a fuse. When defects occur in power film capacitors with controlled self-healing capabilities, the cells with the weak points are the only ones that are insulated by essentially blowing the fuse. As a result, the capacitance decreases as a function of the ratio between the elementary cells and the total surface of capacitor, but no short circuit or failure occurs.

The advantages of controlled self-healing technology include its:

The suppliers with the most experience manufacturing power film capacitors with controlled self-healing technology can also offer competitively low-cost solutions.

The metallized film within power film capacitors also affects performance, as at least two metallized films have to be wound or stacked together in opposing fashion in order to achieve capacitance value.

Metallized film is often wound into flat bobbin designs to create film capacitor products. These elementary bricks effectively balance current and inductance, and are designed for operating temperatures spanning -55°C to 115°C. They are wound on high-productivity winding machines and, although their width and external diameters vary, their generally medium size prevents winding forces from pulling on and damaging the intrinsic dielectric property of the polymer film. Basic connection topology induces the association of bobbins, and the design of the connection system achieves added integration functions within the capacitor.

Inductance below 6nH is needed to limit over-voltage during switching. One way to achieve this is using two bars parallel to each other, as this cancels out the most of the internal inductance by optimizing the recovery surface. However, this approach must be considered with caution, as it can generate additional bus bar tooling costs and manufacturing costs.

In order to optimize power film capacitor designs for EVs and HEVs, it is very important to obtain a mission profile in term of voltage, temperature, and root mean square (RMS) current. These three parameters directly influence both the dimensions and the functional cost of the capacitors.

Figure 3. An example of mission profile for an HEV/EV automotive application

Several leading capacitor manufacturers are working with materials suppliers to further improve the operating parameters of film capacitors for future EV and HEV applications. Of particular interest are new materials that improve the upper limits of operating temperature ranges and increase dielectric constant. For example, higher quality polypropylene films generally have fewer amorphous phases and can withstand operating temperatures up to 105°C — and even higher temperatures for short periods of time.

Thermal conditions are fundamental for capacitor design. The relationship between RMS current and ambient temperature induces hot spot temperature in these capacitors, and hot spot temperatures and voltage are fundamental parameters for achieving the guaranteed long-lifetime and high-reliability performance that EV and HEV applications demand. The thermal resistance and thermal conduction of the capacitor combined with the expected ambient temperature and cooling conditions noted in the mission profile can be used to calculate the hot spot and improve upon the final design.

Further developments will result from a combination of advanced dielectric materials capable of achieving the higher temperature performance and higher hot spot temperatures required by EV and HEV applications, reduced film thicknesses, and enhanced metallization and segmentation processes, and reduced film thicknesses. To improve the electrical performance of power film capacitors the quality of the film itself must be improved. For instance, if the target is to increase epsilon G², where Epsilon = dielectric constant and G = gradient of voltage, the volume of the capacitor is inversely proportional to the square of gradient of voltage.

Table 1. A basic overview of the different types of dielectric materials

However, since this market is expected to continue its global growth, supported by significant technology advancements predicted to achieve range and safety performance parity between EVs and HEVs and traditional ICE vehicles, both industry and government mandates are currently being developed to ensure the safety and performance of the power electronics components responsible for enabling the next-generation WBG inverters that provide these vehicles with higher power density, improved performance, and zero-catastrophic-failure reliability.