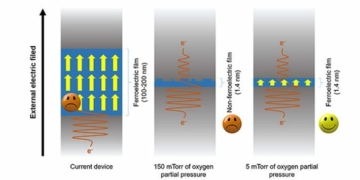 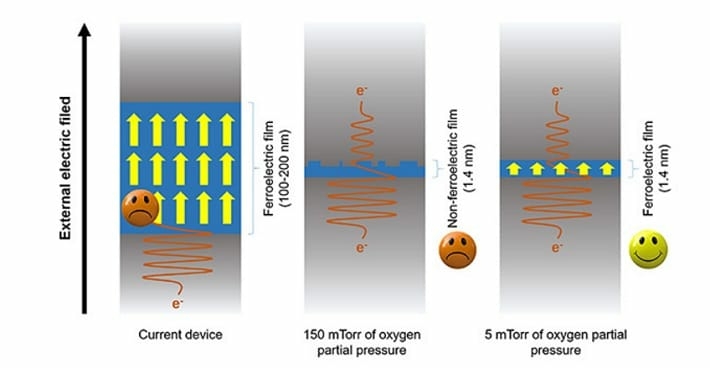 April 4, 2017 | Institute for Basic Science
Most of our computers, cameras, phones and other electronic devices, contain a silicon-based memory called Flash. Only in some cases, another type of memory technology is used: the Ferroelectric RAM (FeRAM). Developed 10 years ago, FeRAM was surpassed by Flash and never really took off. Although FeRAM has lower power usage and faster writing performance, it suffers from some flaws. Firstly, the process of reading FeRAM memory is destructive, meaning that reading the memory sweeps it out. So even if FeRAM devices are potentially faster at writing memory, they are slower at reading it, because every time the device reads the data, it also needs to write them again. Secondly, it has limited storage densities, so that bigger devices are necessary to store the same amount of data. Interestingly, reducing the thickness of the ferroelectric component down to around 1.4-2.6 nanometers can solve both issues at the same time. Researchers at the Center for Correlated Electron Systems, within the Institute for Basic Science (IBS) managed to build functional 1.4 nanometer thick ferroelectric capacitors. Published in Advanced Materials, this research opens new possibilities for getting a step closer to the next-generation devices based on Ferroelectric Tunnel Junctions rather than silicon.

As magnets have a spontaneous magnetic polarization, that is they have a north and south pole, ferroelectric materials have a spontaneous electric polarization, which affects the position of positive and negative electric dipoles inside the material and can be reversed by the application of an external electric field. This characteristic enables ferroelectric capacitors to store memory.

IBS scientists built a model of ferroelectric capacitor composed of a thin film of the ferroelectric material barium titanate (BaTiO3) sandwiched in-between two electrodes of strontium ruthenate (SrRuO3). The thickness of BaTiO3 is critical for the performance of the capacitor.

In a device thicker than a couple of nanometers, memory can be stored by controlling the direction of electric polarization inside the ferroelectric materials. However, reading this memory will inverse the sign of polarization, canceling the information (destructive reading). On the other hand, with a thinner BaTiO3 layer around 1.4-2.6 nanometer, new quantum physics laws emerge and the electrons from the electrodes are more likely to tunnel through BaTiO3. With quantum tunneling mechanism, reading the memory is non-destructive, less electric power is needed and the devices can be packed into smaller spaces.

Building functional ferroelectric capacitors of the right thickness has been a hard task. Even when the ferroelectric layer was thin enough, adding the top electrode caused the device to loose its ferroelectricity. IBS scientists noted that this is caused by irregularities in the interface between the top electrode and the BaTiO3 layer. “We thought that heterogeneous interfaces could cause problems and we worked to make them uniform,” explains SHIN Yeong Jae, first author of the study. This non-uniformity at the interface does not have a great effect when the thickness of the device is large, but it affects the stability of such thin devices.

In this study, IBS scientists have proposed a method for solving this interface non-uniformity problem. During the standard ferroelectric capacitor manufacturing technique, oxygen gas is injected at a high pressure. They found that reducing oxygen pressure helps to keep the interface uniform.

“High oxygen partial pressure of 150 mTorr is usually used, because it is a common belief that it is better to add a lot of oxygen to prevent oxygen vacancies, which are molecules missing oxygen atoms,” continues Shin. “This is true, but we found that 5 mTorr is a good compromise to achieve homogeneous interface without oxygen vacancies.”

Decreasing the oxygen pressure from 150 mTorr to 5 mTorr made the trick: “We see that the oxygen partial pressure used in the experiment is a key variable to improve the interface, now we want to understand how this happens,” concludes Shin.