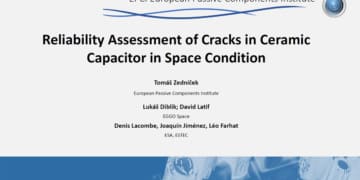 Reliability Assessment of Cracks in Ceramic Capacitor in Space Condition

Reliability Assessment of Cracks in Ceramic Capacitor in Space Condition 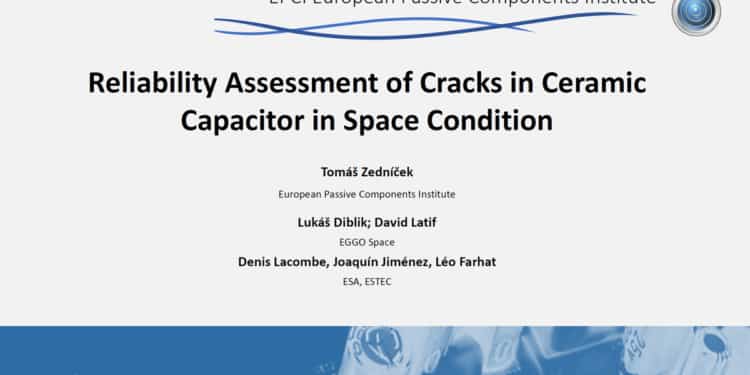 This paper elaborates on problematic of ceramic capacitors MLCC capacitors cracks – literature survey and practical experiments to develop methodology to induce electrode-to-electrode cracks without deterioration of the capacitor’s immediate electrical parameters. In the next step these capacitors are subjected to thermal vacuum and high temperature life test to evaluate its impact to space flight operating conditions.

Cracks in MLCC ceramic capacitor are, unfortunately, a well know phenomena that can depend to several factors. It is believed to reduce the reliability of the capacitor leading to catastrophic failure like short circuit.

When cracked capacitors are found in space projects the usual practice is to replace the defective parts and/or to solve the root cause of the problem as for example by modifying the assembly parameters to reduce the thermo-mechanical stress during assembly of the capacitor. However, in many cases, it is not possible to solve the issue and projects have to take risks by flying with potential defectives capacitors.

There are number of publications and works dedicated to MLCC cracks issues and evaluation of methods to reveal it by non-destructive methods. The first step of our assessment focused on available literature study.

The literature survey on MLCC capacitors cracks inducing methods can be summarised as follows:

Teverovsky in its NASA paper proposed to assess the effect of cracking by pressing the surface with a Vickers indenter. Results showed that cracking does not affect capacitance, which is consistent with the results of flex testing when in many cases capacitance recovers when the stress is removed. The parts electrically passed this test, just dissipation factor showed some sensitivity and increases after cracking by 10 to 50%, but remains within the specified limits.

Despite substantial efforts that have been made to develop methods for revealing cracks in MLCCs after soldering, none is universal and can detect defective parts reliably. Suitability of crack detection by methods also depends to the size of MLCC capacitors. More methods are suitable for larger MLCC capacitors above 1812 size, only few can be used for 1210 case sizes and smaller.

The test sequence performed on ten samples did not show any signs of surface cracks observable under optical microscope. There was also no deterioration of electrical parameters neither THD voltage after the test.

The second method tried to simulate extreme flex cracks by replicating of Teverovsky’s method with defined mechanical pin stress force to the center of capacitor body.

Sharp mechanical pin was applied from top side to the center of the MLCC body. The pin strength was set to the maximum device capability force: 510±10 N. The parts were visually inspected under optical microscope and electrically characterized including THD before and after the test.

Some MLCC samples were considerably mechanically damaged, nevertheless there is not necessary a direct link between the level of mechanical damage and electrical deterioration / short circuit.

The following mechanical pin stress parameters were modified for detail investigation on its impact to initiation of cracks.

New set of 10 samples were used, samples No. 1-5 were investigated after sharp pin exposure and changing force, the other samples 6-10 with blunt tool pin shape and higher force ratio.