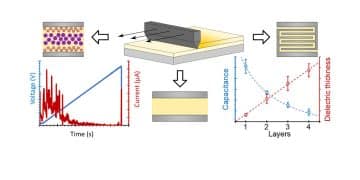 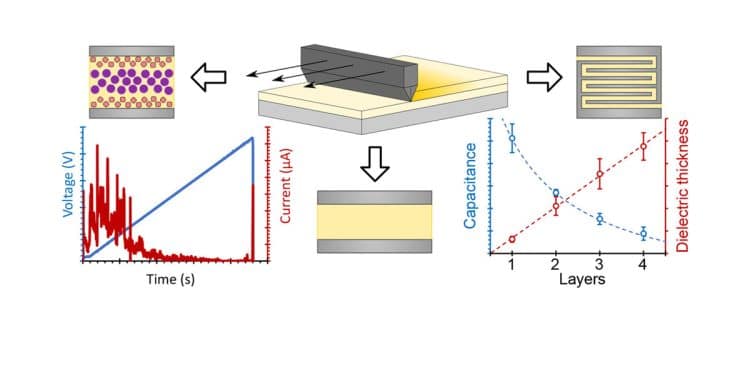 Nanocomposite dielectrics are an increasingly important area of innovation in capacitor research as an avenue to improve capacitive energy density, electrical breakdown strength, and temperature stability of devices.

In such devices, morphology control is critical in order to optimize electrical field distribution in the device and to prevent the clustering of nanoparticles lowering breakdown voltages. However, this is difficult to achieve with large-scale fabrication techniques, such as melt extrusion and stretching, as melt processing can induce clustering and offers few possibilities for fine structure control of length scales below 1 µm.

Layer-by-layer fabrication offers a potential bottom-up alternative whereby dielectrics are printed by successive depositions of ultra-thin layers of a room-temperature-stable polymer ink. This would allow fine thickness and morphology control and could easily be adapted to industrial-scale printing techniques, like roll-to-roll slot-die coating. This study explores this technique by developing polypropylene-based inks in industry-friendly solvents that are then used to fabricate capacitor devices. A gel ink was able to be used to deposit ultrathin (sub-200 nm) layers of mostly amorphous polypropylene with high reproducibility.

Capacitors based on these polypropylene layers perform commensurate with commercial devices, exhibiting excellent self-clearing and breakdown performance. Successive depositions of the ink were also demonstrated, allowing the fabrication of devices with finely tuned thicknesses and capacitances, as well as nanocomposite capacitors. This demonstrates the viability of layer-by-layer dielectric printing at large scale and paves the way for commercial ultra-thin conformable polypropylene capacitors, multi-component sandwich nanocomposite capacitors, and multilayer polypropylene capacitors, as well as brand new possibilities in dielectrics research.

This study detailed the production of room-temperature-stable polypropylene inks in industry-friendly solvents with the goal of demonstrating LBL printing of a polymer dielectric capacitor. The ink was produced by high-temperature emulsification and was gel based – exhibiting no evidence of nanoparticle formation. The ink was able to reproducibly deposit ultra-thin layers of largely amorphous polypropylene, which performs consistent with commercial polypropylene as a dielectric material, particularly with regard to self-clearing capabilities. Furthermore, successive depositions of the gel ink were shown to be possible and to predictably build up the thickness of the dielectric with commensurate changes in the capacitance of the device, and the fabrication of structured nanocomposite capacitors with improved performance was demonstrated.

This study has, therefore, demonstrated a viable new fabrication method for polypropylene-based polymer and nanocomposite capacitors based on a layer-by-layer strategy. Generalisation to other thermoplastic polymers is likely possible, however the self-clearing capability of polypropylene makes it an attractive candidate for continued research. With some optimisation, this technique can be easily scaled to large-scale fabrication via the use of existing commercial printing techniques, allowing the commercialisation of a range of new device structures and fine morphology control in nanocomposite dielectrics. Furthermore, LBL dielectric fabrication can act as a platform for future research to explore a wide variety of different dielectric structures with precision – allowing both confirmation of theoretical models and the development of new dielectric materials.