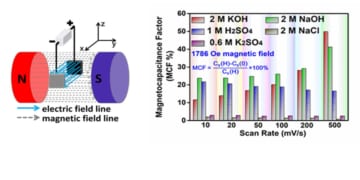 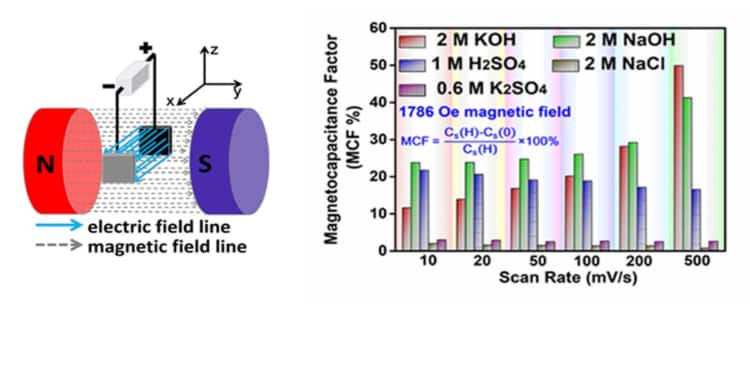 Recently, an experiment designed by Prof. YAN Xingbin’s group from the Lanzhou Institute of Chemical Physics (LICP) of the Chinese Academy of Sciences has revealed that applying an external magnetic field can induce capacitance change in aqueous acidic and alkaline electrolytes, but not in neutral electrolytes. The experiment also shows that the force field can explain the origin of the magnetic field effect.

This new discovery establishes a relationship between magnetic fields and supercapacitors, and provides insight into the transport behavior of ions in aqueous electrolytes.

Carbon-based supercapacitors are among the most prominent electrochemical energy storage devices because of their excellent power output and superior cycle life. During the charging/discharging process, the difference in electrical potential between the positive and negative electrodes generates a magnetic field based on Faraday’s law of electromagnetic induction.

In this work, the researchers first reported that the external magnetic field indeed affects the charge storage of a nonmagnetic aqueous carbon-based supercapacitor system, thus overcoming the negligible effect of the magnetic field on nonmagnetic electrochemical systems.

According to the researchers, the direction and intensity of the magnetic field, concentration of electrolytes and voltammetry sweep all affect the capacitance change in acidic and alkaline electrolytes.

In addition, a quantitative relationship among the limiting current density at the electrode/electrolyte interface, the intensity of the magnetic field, and the concentration and viscosity of the electrolytes was identified, which provided a completely new insight into the charge transport behavior of supercapacitors.

“By establishing the relationship between magnetic fields and supercapacitors, we were able to deeply understand the transport behavior of ions in aqueous electrolytes. We expect to apply magnetic field-enhanced electrochemistry to other energy storage devices,” said Prof. YAN.