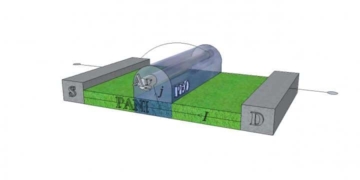 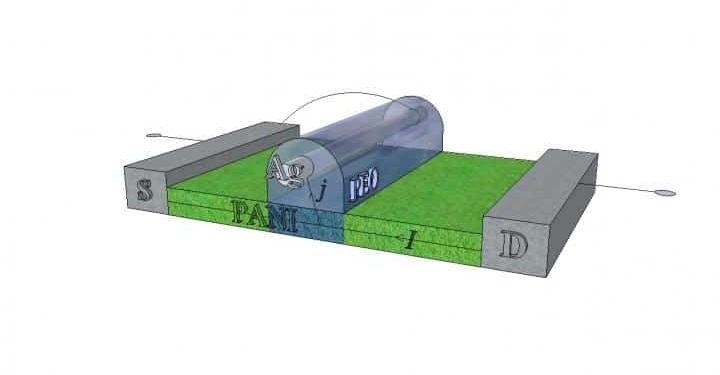 Scientists from the Kurchatov Institute, MIPT, the University of Parma (Italy), Moscow State University, and Saint Petersburg State University have created a neural network based on polymeric memristors – devices that can potentially be used to build fundamentally new computers. According to the researchers, these developments will primarily help in creating systems for machine vision, hearing, and other sensory organs, and also intelligent control systems for various devices, including autonomous robots.

The authors of the new study focused on a promising area in the field of memristive neural networks – polymer-based memristors – and discovered that creating even the simplest perceptron is not that easy. In fact, it is so difficult that up until the publication of their paper in the journal Organic Electronics, there were no reports of any successful experiments (using organic materials). The experiments conducted at the Nano-, Bio-, Information and Cognitive Sciences and Technologies (NBIC) centre at the Kurchatov Institute by a joint team of Russian and Italian scientists demonstrated that it is possible to create very simple polyaniline-based neural networks. Furthermore, these networks are able to learn and perform specified logical operations.

A memristor is an electric element similar to a conventional resistor. The difference between a memristor and a traditional element is that the electric resistance in a memristor is dependent on the charge passing through it, therefore it constantly changes its properties under the influence of an external signal: a memristor has a memory and at the same time is also able to change data encoded by its resistance state! In this sense, a memristor is similar to a synapse – a connection between two neurons in the brain that is able, with a high level of plasticity, to modify the efficiency of signal transmission between neurons under the influence of the transmission itself. A memristor enables scientists to build a “true” neural network, and the physical properties of memristors mean that at the very minimum they can be made as small as conventional chips.

Some estimates indicate that the size of a memristor can be reduced up to ten nanometers, and the technologies used in the manufacture of the experimental prototypes could, in theory, be scaled up to the level of mass production. However, as this is “in theory”, it does not mean that chips of a fundamentally new structure with neural networks will be available on the market any time soon, even in the next five years.

The plastic polyaniline was not chosen by chance. Previous studies demonstrated that it can be used to create individual memristors, so the scientists did not have to go through many different materials. Using a polyaniline solution, a glass substrate, and chromium electrodes, they created a prototype with dimensions that, at present, are much larger than those typically used in conventional microelectronics: the strip of the structure was approximately one millimeter wide (they decided to avoid miniaturization for the moment). All of the memristors were tested for their electrical characteristics: it was found that the current-voltage characteristic of the devices is in fact non-linear, which is in line with expectations. The memristors were then connected to a single neuromorphic network.

A current-voltage characteristic (or IV curve) is a graph where the horizontal axis represents voltage and the vertical axis the current. In conventional resistance, the IV curve is a straight line; in strict accordance with Ohm’s Law, current is proportional to voltage. For a memristor, however, it is not just the voltage that is important, but the change in voltage: if you begin to gradually increase the voltage supplied to the memristor, it will increase the current passing through it not in a linear fashion, but with a sharp bend in the graph and at a certain point its resistance will fall sharply.

Then if you begin to reduce the voltage, the memristor will remain in its conducting state for some time, after which it will change its properties rather sharply again to decrease its conductivity. Experimental samples with a voltage increase of 0.5V hardly allowed any current to pass through (around a few tenths of a microamp), but when the voltage was reduced by the same amount, the ammeter registered a figure of 5 microamps. Microamps are of course very small units, but in this case it is the contrast that is most significant: 0.1 μA to 5 μA is a difference of fifty times! This is more than enough to make a clear distinction between the two signals.

After checking the basic properties of individual memristors, the physicists conducted experiments to train the neural network. The training (it is a generally accepted term and is therefore written without inverted commas) involves applying electric pulses at random to the inputs of a perceptron. If a certain combination of electric pulses is applied to the inputs of a perceptron (e.g. a logic one and a logic zero at two inputs) and the perceptron gives the wrong answer, a special correcting pulse is applied to it, and after a certain number of repetitions all the internal parameters of the device (namely memristive resistance) reconfigure themselves, i.e. they are “trained” to give the correct answer.

The scientists demonstrated that after about a dozen attempts their new memristive network is capable of performing NAND logical operations, and then it is also able to learn to perform NOR operations. Since it is an operator or a conventional computer that is used to check for the correct answer, this method is called the supervised learning method.

Needless to say, an elementary perceptron of macroscopic dimensions with a characteristic reaction time of tenths or hundredths of a second is not an element that is ready for commercial production. However, as the researchers themselves note, their creation was made using inexpensive materials, and the reaction time will decrease as the size decreases: the first prototype was intentionally enlarged to make the work easier; it is physically possible to manufacture more compact chips. In addition, polyaniline can be used in attempts to make a three-dimensional structure by placing the memristors on top of one another in a multi-tiered structure (e.g. in the form of random intersections of thin polymer fibers), whereas modern silicon microelectronic systems, due to a number of technological limitations, are two-dimensional. The transition to the third dimension would potentially offer many new opportunities.

What do we mean by “fundamentally different computers”?

The common classification of computers is based either on their casing (desktop/laptop/tablet), or on the type of operating system used (Windows/MacOS/Linux). However, this is only a very simple classification from a user perspective, whereas specialists normally use an entirely different approach – an approach that is based on the principle of organizing computer operations. The computers that we are used to, whether they be tablets, desktop computers, or even on-board computers on spacecraft, are all devices with von Neumann architecture; without going into too much detail, they are devices based on independent processors, random access memory (RAM), and read only memory (ROM).

The memory stores the code of a program that is to be executed. A program is a set of instructions that command certain operations to be performed with data. Data are also stored in the memory* and are retrieved from it (and also written to it) in accordance with the program; the program’s instructions are performed by the processor. There may be several processors, they can work in parallel, data can be stored in a variety of ways – but there is always a fundamental division between the processor and the memory. Even if the computer is integrated into one single chip, it will still have separate elements for processing information and separate units for storing data. At present, all modern microelectronic systems are based on this particular principle and this is partly the reason why most people are not even aware that there may be other types of computer systems – without processors and memory.

*) if physically different elements are used to store data and store a program, the computer is said to be built using Harvard architecture. This method is used in certain microcontrollers, and in small specialized computing devices. The chip that controls the function of a refrigerator, lift, or car engine (in all these cases a “conventional” computer would be redundant) is a microcontroller. However, neither Harvard, nor von Neumann architectures allow the processing and storage of information to be combined into a single element of a computer system.

However, such systems do exist. Furthermore, if you look at the brain itself as a computer system (this is purely hypothetical at the moment: it is not yet known whether the function of the brain is reducible to computations), then you will see that it is not at all built like a computer with von Neumann architecture. Neural networks do not have a specialized computer or separate memory cells. Information is stored and processed in each and every neuron, one element of the computer system, and the human brain has approximately 100 billion of these elements. In addition, almost all of them are able to work in parallel (simultaneously), which is why the brain is able to process information with great efficiency and at such high speed. Artificial neural networks that are currently implemented on von Neumann computers only emulate these processes: emulation, i.e. step by step imitation of functions inevitably leads to a decrease in speed and an increase in energy consumption. In many cases this is not so critical, but in certain cases it can be.

Devices that do not simply imitate the function of neural networks, but are fundamentally the same could be used for a variety of tasks. Most importantly, neural networks are capable of pattern recognition; they are used as a basis for recognising handwritten text for example, or signature verification. When a certain pattern needs to be recognised and classified, such as a sound, an image, or characteristic changes on a graph, neural networks are actively used and it is in these fields where gaining an advantage in terms of speed and energy consumption is critical. In a control system for an autonomous flying robot every milliwatt-hour and every millisecond counts, just in the same way that a real-time system to process data from a collider detector cannot take too long to “think” about highlighting particle tracks that may be of interest to scientists from among a large number of other recorded events.