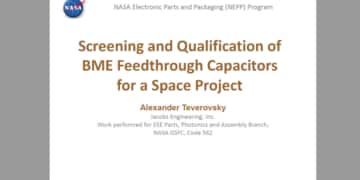 Screening and Qualification of BME Feedthrough Capacitors for a Space Project

Screening and Qualification of BME Feedthrough Capacitors for a Space Project 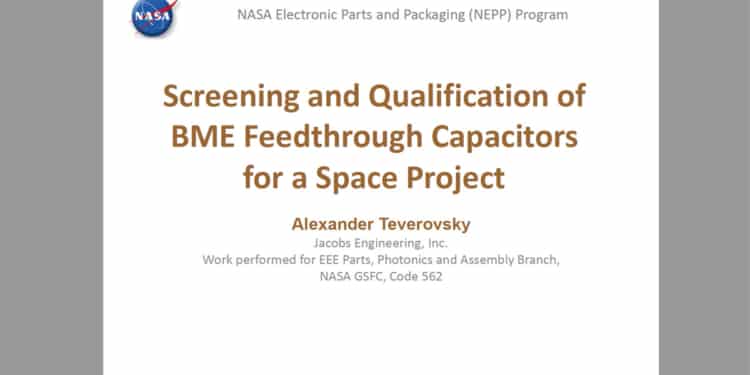 Surface mount technology feedthrough ceramic capacitors are gaining popularity in Hi-Rel systems due to small size and great filtering characteristics.  In this work, BME feedthrough capacitors compliant with AEC-Q200 requirements have been evaluated, screened and qualified for a space project.  Evaluation included analysis of the effect of post-soldering thermal shocks, temperature dependencies of leakage currents, distribution of breakdown voltages, assessments of high-current capability, and thermal resistance of the parts.  The parts have been screened and qualified at conditions close to the military requirements for ceramic capacitors.  No failures were detected during screening including burning-in, but two samples failed during monitored 2000 hour life testing at 125C and two times rated voltage.  Failure analysis revealed manufacturing defects that required additional analysis of screening and qualification test conditions.  Highly accelerated life testing (HALT) has been carried out to assess reliability acceleration factors and the probability of failure at the use conditions.  An approach to selection of adequate burning-in and life test conditions is discussed.

The paper was presented by Alexander Teverovsky, Jacobs Engineering, Inc./NASA GSFC, USA at the 3rd PCNS 7-10th September 2021, Milano, Italy as paper No.3.2.

The major driving forces for using commercial components for space instruments instead of military-grade parts are better performance, availability, and in some cases, a lower cost.  Note that the cost of the parts increases substantially due to additional screening and qualification tests; still, the benefits of using high performance components often prevail.  Volumes have been written about problems of using COTS components in hi-rel systems, and the most comprehensive reviews can be found in [1-3] and various presentations given recently at ESA and NASA workshops.  Uncertainty in reliability of COTS, and most importantly, in consistency of the quality between different lots of parts are the major concerns.  Upgrading by additional screening and qualification testing are often the only way to mitigate the problem and ensure the necessary reliability of components for hi-rel applications.  Burning-in and life testing are the most important, reliability-related elements of the quality assurance system, but conditions and requirements for these tests have not been addressed properly yet.

The existing guidelines for selection, screening and qualification of components for space applications mostly follow the requirements of the relevant military specifications.  These requirements have been developed empirically over the years and their applicability for new technology components has not been proven.  Testing of commercial capacitors using conditions developed for military components might not give sufficient confidence in quality of the parts.  For example, if a group of ceramic or tantalum capacitors can pass life testing per the existing guidelines, they still will not have the failure rate of similar established reliability military components.  On the other hand, failures of capacitors during life testing do not mean that the part cannot operate reliably for a space mission.

Automotive grade capacitors manufactured and tested in compliance with the requirements of AEC-Q200 are assumed to be components of higher quality and reliability compared to the general application capacitors.  However, AEC-Q200 does not require burning-in (BI) screening and life testing for every production lot.  In this regard, automotive industry capacitors differ from the MIL-spec components and can be considered as COTS.  It is also important, that not every lot that can pass AEC-Q200 requirements is actually used in cars, and vehicle manufacturers can impose additional requirements for their components.

In this work, feedthrough capacitors manufactured to AEC-Q200 automotive industry requirements have been evaluated for their performance at extreme conditions.  The effectiveness of screening and qualification tests at conditions close to military requirements have been assessed and an alternative approach to quality assurance of COTS components for a space mission is suggested.

The part is a 10 nF BME X7R, size 0805 feedthrough capacitor rated to 50V and 1A DC input-output current.  The specified insulation resistance is 1 Gohm and DC input-output resistance is 0.15 ohm.  The evaluation tests included assessments of the capability of the parts to sustain high current pulses, thermal resistances, breakdown voltages, and leakage currents at high temperatures and voltages. To check the effect of high current pulses, the reversibility of voltage drop measurements was tested by increasing and decreasing current stress steps at steps of 0.5A and 0.1 sec.  Fig. 1a shows that increasing currents up to 5A did not damage the part.  Similar tests at steps of 0.75A up to 7.5 A showed that I-V characteristics remained linear up to 6A indicating DC resistance of 0.11 ohm (see Fig. 1b).  As can be seen from Fig. 1A, at currents ~5 A the voltage rises with time, which is due to increasing temperature of the nickel conductors.

To assess the thermal run-away conditions, the parts were stressed by 12 steps of 0.1 sec pulses increasing with 1A increments (see Fig. 2a).  Nickel features a relatively high temperature coefficient of resistance, 0.006 1/°C, which allows for estimations of the temperature rise based on resistance variations detected by voltage increase during the test.  Results of these estimations show that a noticeable increase of temperature (~5.5 °C) occured at 7A and the thermal run-away condition when temperature sharply increased to more than 100 °C happened after 1 sec at 12A (Fig. 2a).

An infrared camera was used to get a more accurate assessments of the temperature rise at different levels of power dissipations.  Results of these tests are shown in Fig. 3 and indicate a thermal resistance of the parts Rt = 29 ± 4 K/W.  These values are about two times greater than the values of Rt calculated for chip capacitors with a few electrodes [4], but substantially lower than the values determined experimentally for chip tantalum capacitors (~ 100 K/W) [5].

At the rated conditions, I = 1A and RDC max = 0.15 ohm, the dissipated power will be 0.15W, and the possible temperature rise will not exceed 5 °C, which is acceptable for most applications.

Leakage currents in the parts were measured in a wide range of temperatures, up to 145 °C and voltages, up to 150V.  Distributions of leakage currents measured at 145 °C and different voltages and temperature dependencies of the currents are shown in Fig. 4.  The distributions had no high leakage current tails thus indicating high quality of the product, and even at 150V and 145 °C leakage currents were below 0.1 mA.  Both voltage and temperature increased current exponentially, which is consistent with the Schottky mechanism of conductivity [6].  The activation energy for the feedthrough capacitors was 0.49 ± 0.02 eV, which is consistent with the values for BME capacitors (0.4 to 0.6 eV).