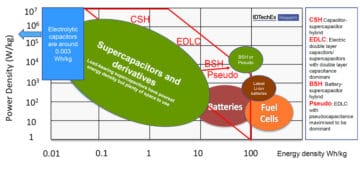 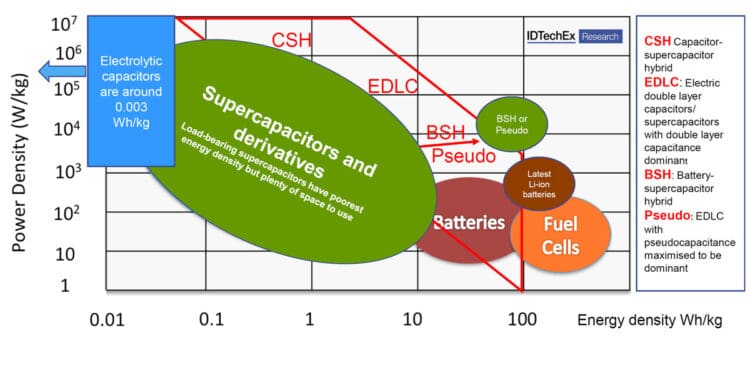 Supercapacitors are on a path to close gap or even overtake batteries, providing safety, faster charging and size advantages while helping to eliminate complex battery management systems in a range of automotive, grid and IT applications.

Particularly bullish on the emerging energy storage and charging technology is IDTechX, which predicts supercapacitors will eventually “usurp” current battery technologies like lithium-ion. It sees about 80 supercapacitor manufacturers emerging over the next two decades with cars, buses, Maglev trains and a range of other use cases emerging as electric motors replace internal combustion engines.

With a growing roster of electric vehicle companies, China is seen leading the way with an estimated 30 supercapacitor manufacturers emerging by 2041.

“Supercapacitors of around 50Wh have been shown to greatly enhance 48V hybrid cars so they can fit electrical accessories usually only possible on pure electric cars. Geely has made a huge commitment to install these supercapacitors. This new addressable market is multi-billion dollars yearly”.

Auto analyst Egil Juliussen explained the potential advantages of supercapacitor technology: “The good news about capacitors is, you can charge them really fast because you just dump the current in there and all of a sudden it’s there.”

Likening the energy technology to cache memory, Juliussen continued: “Supercapacitors could also be between the charging station and the electricity network. You’ve got to pull a lot of current there, too. So, having standby supercapacitor with extra power there that you then load into it when the car’s there, that could be done as well.”

Juliussen is guarded about when, or even if, supercapacitor technology might achieve its potential, acknowledging the scenario described above may be “pie in the sky.” Then again, he added, “you never know.”

IDTechX takes a glass more-than-half-full approach, forecasting the supercapacitor technology is poised to take off as the list of transportation, IoT and data center applications continues to grow.

Based on the premise that nothing can be done without power, and fast-charging of electric vehicles is bound to be a major selling point, the desire to see supercapacitor technology succeed is warranted. In one example, the industry analyst envisions urban light rail and bus networks charging batteries in 20 seconds while reducing the need to replace expensive batteries. Recycling of costly materials would also be eliminated.

Still, energy density remains a critical design consideration for power electronics applications. That is one metric where batteries still outperform supercapacitors. As measured in watt-hours per kilogram, IDTechX reckons supercapacitors approach the low-end for current battery energy density, or just over 10 Wh/kg.

“Load-bearing supercapacitors have the poorest energy density but plenty of space to use,” the industry researcher notes.

Hence, it foresees a mix of hybrid deployments ranging from capacitor-supercapacitor combinations to battery-supercapacitor hybrids. The latter could enable applications like fast wireless charging.

Thus far, IDTechX reckons supercapacitors have replaced 10 percent of pricey lithium-ion batteries and will quickly send lead-acid batteries the way of the dodo bird. “Supercapacitor improvement and market roll-out is now moving fast, with major advances and disruptions coming in the next twenty years,” it concludes.