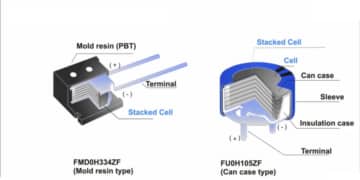 Supercapacitors Structure and How it Works

Supercapacitors Structure and How it Works 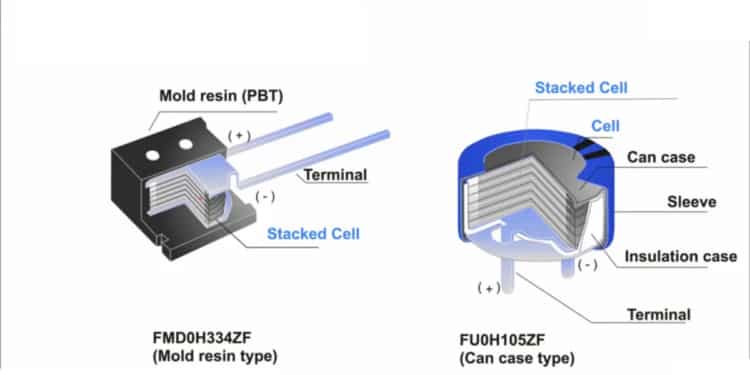 Unlike a battery, a supercapacitor stores and releases energy quickly through physical adsorption and ions’ desorption in the electrolyte between its electrodes. These processes are much faster than the chemical reactions involved in battery charging. Given the supercapacitor’s low internal resistance, it can fully charge within a few seconds. In contrast, a secondary cell can take from ten minutes to several hours to fully charge. Moreover, there is no theoretical limit to life cycle, whereas a lithium-ion secondary cell has a finite lifetime of about 500 cycles.

The electrolyte also has an essential influence over device properties and typically is an organic compound. KEMET is the world’s only producer of supercapacitors that use aqueous electrolyte solutions. Dilute sulfuric acid electrolytes are highly conductive, have a low environmental impact, are non-toxic and non-flammable, and yield strong performance and safety credentials. They also typically have greater resistance to moisture absorption than organic compounds, resulting in a longer life with better stability.

For all device types, the electrolyte properties determine the overall supercapacitor terminal voltage. The voltage, when fully charged, is usually less than 3V.

A conventional approach to constructing supercapacitors is comparable to that of a coin cell battery, comprising lower and upper metal cases that are joined by swaging to enclose the carbon electrodes and organic electrolyte. Although an internal gasket aids in sealing, the electrolyte can dry within a relatively
short lifetime, and thermal shock can compromise structural integrity.

KEMET’s supercapacitors feature a high-strength vulcanized rubber bond that ensures high safety against liquid leakage. The cross-section of Figure 3 shows how these supercapacitors are constructed, including the dilute sulfuric acid electrolyte, rubberized electrodes, and separator membrane.

Several cells are connected in series to achieve the desired output voltage higher than the base voltage of a single cell. Coin- type supercapacitors, for example, are often stacked inside an external can or within a tube of heat-shrink material and electrodes attached to the upper and lower surfaces.

Supercapacitors containing a dilute sulfuric acid electrolyte can be stacked efficiently to achieve higher voltage ratings within smaller case sizes, with the added advantage of a strongly bonded seal to protect against thermal and mechanical shock.

This robust and reliable device from KEMET has been able to achieve the severe environmental resistance required by the automotive market.

Figure 5 shows KEMET’s supercapacitor product, FMD0H105ZF. This high-capacity supercapacitor in a resin-molded package enables tape-and-reel packaging and is compatible with automatic mounting. It is the world’s first device to guarantee 1,000 hours in a high temperature and high humidity environment of 85°C-85% with a high breakdown voltage of 5.5V.

Figure 6 shows another KEMET product, FU0H105ZF. This device operates up to 5.5V, and the outer packaging is a sealed metal conventional can. This product is a long-life supercapacitor with a life of 4,000 hours at 85°C. This 4,000-hour life means that the product can be used in a wide range of applications. Four thousand hours at 85°C is equivalent to 10 years of life when referring to the mission profile near the dashboard of an automobile.

KEMET has paid special attention to cell materials to meet automotive requirements, which require high reliability. For the separator, highly heat-resistant material is used so that the pore diameter of the separator would not close even after extended use in a high-temperature environment.

In addition, the terminal material has been reviewed to improve resistance to high humidity and vibration. Those NPDs have a significant advantage in the resistance to moisture of the electrolyte under severe conditions (85°C/85% RH), one of the requirements for automotive use, as an example.

Reality and Lifetime of Supercapacitors

Advantages of Supercapacitors in High Temp and High Humidity

A common problem for electrolytic capacitors is for the liquid electrolyte to dry up under high-temperature conditions. When the electrolyte dries out, capacitance decreases, and ESR increases. Similarly, KEMET’s supercapacitors form an electric double layer with the H+ and O- ions of water in dilute sulfuric acid, so the evaporation of these water ions under high-temperature conditions can lead to dry-up and a shortened lifetime.

Supercapacitors offer a high-performing alternative to batteries in a wide variety of backup-power applications, delivering far greater cycle life without the need for designers to worry about battery recharging or replacement.

KEMET’s new supercapacitors will be useful in the automotive, industrial, medical, and aerospace industries, along with any other fields requiring high-reliability performance for applications such as RTC hold-up and non-volatile memory backup. 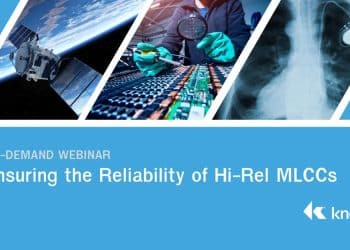