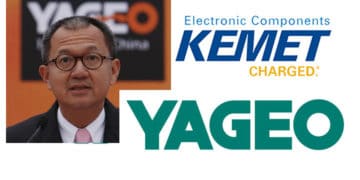 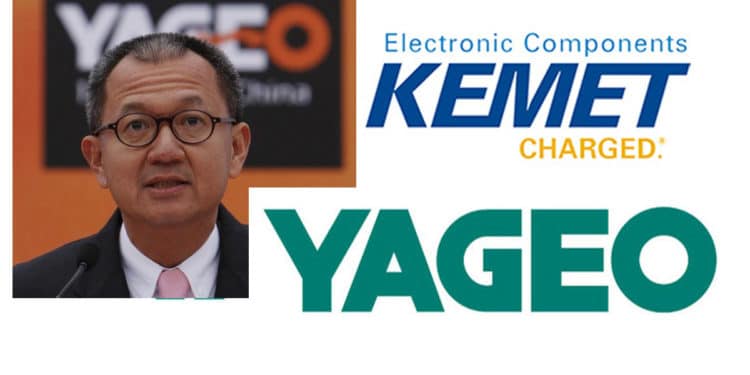 DigiTimes magazine published an interview with Yageo chairman Pierre Chen about synergy between Kemet and Yageo under announced acquisition.

Taiwan-based Yageo announced recently plans to acquire fellow US-based passive component company Kemet in an all-cash transaction valued at US$1.8 billion. The acquisition is expected to turn Yageo into a global top-3 passive components vendor along with Murata and Semco.

In a recent media conference, Yageo chairman Pierre Chen talked about the synergies to be generated by the company’s Kemet acquisition. Chen also expressed optimism about Yageo’s future development following the acquisition, with the Taiwan-based passive components vendor eyeing a bigger share of the high-end segment such as automotive electronics and 5G networking.

Q: Would you provide Yageo’s revenue and profit outlook following the company’s acquisition of Kemet.

A: Yageo expects to complete its Kemet acquisition in the second half of 2020. Following the acquisition, Yageo will be able to see its revenues double, with a robust 80-90% increase in its profits. Yageo will also be able to expand its cash flow by 75%. The deal will generate many synergies for both Yageo and Kemet.

Q: Why did Yageo decide to merge with Kemet? What is your strategic goal for the deal?

A: Kemet has the largest share of the global tantalum capacitor market. In the MLCC segment, Kemet has an only 2% share in terms of volume. Nevertheless, Kemet’s MLCC output value is quite close to Yageo’s thanks to its deployments in the high-end automotive, industrial and 5G networking sectors. It’s worth mentioning that Kemet’s MLCC ASPs are as much as 20 times Yageo’s.

Yageo in 2018 acquired Pulse Electronics to gain access to Pulse’s wireless communications expertise. With commercial 5G services set to be rolled out globally next year, Yageo is capable of stepping up its deployments in the 5G communication segment.

In addition, Yageo has been striving to expand its presence in the car electronics segment. About 8% of Yageo’s revenues is generated from our automotive offerings, and the proportion will continue to grow. Nevertheless, Yageo’s current automotive products are targeted mainly at GPS, audio and entertainment systems, and we have not entered the security field.

Kemet is dedicated to providing passive components for high-end automotive parts such as electrical systems, engine and ABS, which will definitely extend Yageo’s offerings for automotive electronics applications.

In addition, Kemet’s tantalum capacitor market leadership will make a further positive contribution to Yageo’s product portfolio. Kemet with its tantalum capacitors has already cut into the supply chain of the world’s first-tier auto parts vendors.

Moreover, Yageo and Kemet will complement each other after the merger. Both parties are excited about the deal.

A: The merger will combine our strengths to achieve synergies in product and technology offerings, as well as geographic coverage. Our merger will also enhance our ability to serve customers in not only consumer electronics but also the high-end automotive, industrial, aerospace, telecom and medical sectors. Meanwhile, employees from both sides will work together to drive the combined entity’s future growth and deliver enhanced value for our shareholders as well as customers.

Acquiring Kemet will mark an important step in Yageo’s growth over the next five to 10 years. The acquisition will also allow Yageo to further stabilize its profitability. Kemet has as high as 70% of revenues generated from its high-end capacitors, which will help improve Yageo’s product mix.

Yageo after its merger with Kemet will see capacitor sales account for half of its total revenues. Of Yageo’s total capacitor revenues following the deal, 50% will come from tantalum capacitor sales.

Meanwhile, Yageo will generate more revenues from the Europe, US and Japan markets after taking over Kemet. Yageo currently has as high as 70% of revenues generated from the Asian region excluding Japan, while Kemet has 60% of revenues from Japan, Europe and the US.

In addition, the combined entity will see revenues generated from the automotive electronics sector account for over 10% of revenues, given Kemet’s strength in this high-end field.

Kemet is also a world-class company with 23 manufacturing facilities worldwide. The combined company will have an enhanced global footprint and better serve customers through a combined 42 manufacturing plants and 14 dedicated R&D centers.

Q: Would you share with us when Yageo decided to negotiate the deal?

A: I paid several visits to Kemet after learning that the company was seeking a new CEO since early 2019.

It took me 11 months to negotiate this deal, as I tried to persuade Kemet and its management why Yageo would be the perfect complement to the US-based company. We have only one product line – MLCC – overlapped, and no antitrust concerns can be caused given our combined 14-15% share of the global MLCC output.

Q: What is the combined entity’s strategy in Japan, where there is a passive component leader?

A: The combination of Yageo and Kemet will create an industry leader in the US$28 to US$32 billion passive components industry, with combined annual revenues of approximately US$3 billion. We will be among the world’s top-3 passive component vendors.

For Yageo, merging with Kemet will be an important milestone in our entry into the Japan market, where demand for high-end passive components is strong. Kemet’s previous acquisition of NEC Tokin allowed the US firm to enhance its client portfolio locally in Japan, with those Japan-based clients mainly engaged in the high-end industrial and automotive sectors. Yageo through its merger with Kemet intends to maintain Kemet’s existing customers in Japan.

Q: Would you comment on the US-China trade war impact? How is the impact on Yageo so far?

A: The US-China trade war has had a negative impact on Yageo since late 2018, with our inventory piling up. Nevertheless, Yageo managed to cut its inventory level to 90 days in the third quarter of 2019. We also have been keeping a close eye on inventory levels at our customers and channels.

Yageo will continue lowering its inventory level to less than 70 days in the fourth quarter, which we believe is an indicator of demand recovery. Besides, we are more optimistic about the demand outlook next year, thanks to the commercialization of 5G.

In addition, acquiring Kemet will further enhance Yageo’s competitiveness in the high-end part of the market such as automotive, industrial and 5G communications. The acquisition will also provide Yageo with a more sustainable business.