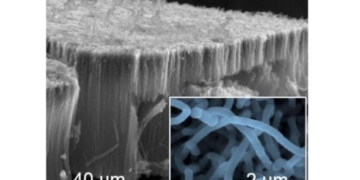 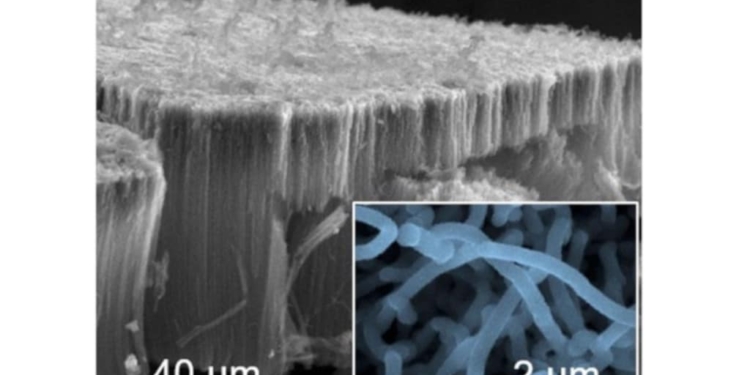 A newly discovered supercapacitor has the highest energy density of any comparable system as demonstrated by a team of Molecular Foundry users and staff. These ultracapacitors can be charged and discharged repeatedly. The team’s new design approach also makes them very stable.

The Impact
The new supercapacitor performs far better than earlier versions. It is less likely to self-discharge or short circuit. Specifically, it has an operating voltage window three times larger than before. Further, it has the highest energy density of any similar capacitor. The higher voltage and high energy density mean the battery can achieve higher power and longer operating time—suggesting that they could be a competitive alternative to lithium batteries.

Capacitors are electrical components that store energy and are widely used in electronic devices. Typical supercapacitors, named for their ability to store more electrical charge than standard capacitors, store charge “physically” through the buildup of charges on their surfaces. On the other hand, pseudocapacitors can store charge “chemically” through redox reactions where one species transfers electrons to another, similar to a battery.

Pseudocapacitors can store as much charge as some batteries; however, while a battery charges and discharges over several hours (for example, charging and using your cell phone or laptop), pseudocapacitors can operate much faster, on the scale of tens of seconds to several minutes. Supercapacitors often show high power density and long operation lifetimes but are limited by having low energy density. While pseudocapacitors store more energy, their widespread use has been hampered by their narrow electrochemical voltage window, which is the voltage range where the electrode materials are stable.

On its own, titanium disulfide is light, cheap, and has many potential benefits if used in a lithium-based energy storage system, but the material degrades rapidly and has relatively low conductivity. It’s been previously shown that coating nanocrystalline titanium disulfide onto vertically aligned carbon nanotubes (VACNTs) can form highly conductive, 3-D porous networks to improve electrical conductivity, increase surface area, and stabilize the electrochemical reactions. However, the existing methods for creating these pseudocapacitors have problems with uniform coverage, contamination, and high toxicity.

The researchers from the University of California at Berkeley worked with the Molecular Foundry’s Adam Schwartzberg, an expert in atomic layer deposition (ALD), to develop a two-step process combining ALD with a chemical vapor deposition (CVD) process to make coated VACNT electrodes that have precisely defined nanostructures. When used with an ultra-high concentration lithium-ion electrolyte, the “hybrid” supercapacitor has an operating voltage window three times larger than before, making it comparable to organic electrolyte systems. The hybrid supercapacitor also has the highest energy density of any other pseudocapacitor. The new capabilities could provide an alternative to lithium batteries.

Scientists could use the new fabrication method combining ALD and CVD to coat titanium disulfide or other transition metal materials onto a variety of substrates. These coatings could lead to further advances in the next generation of energy storage systems.

Funding
This work was performed in part at the Molecular Foundry, a user facility supported by the Department of Energy, Office of Science, Office of Basic Energy Sciences and supported in part by Berkeley Sensor and Actuator Center, a National Science Foundation/ Industry/University Research Collaboration Center.