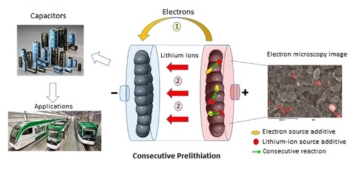 Toward a low-cost industrialization of lithium-ion capacitors

Toward a low-cost industrialization of lithium-ion capacitors 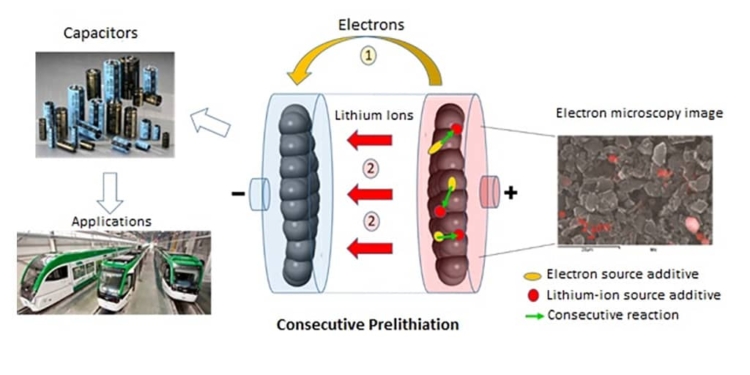 Researchers have proposed combining two additives instead of one to facilitate the incorporation of lithium within capacitors, in order to promote the low-cost, simple, and efficient development of the lithium-ion capacitors used to store electrical energy.

Combining two additives instead of one to facilitate the incorporation of lithium within capacitors: that is the solution proposed by researchers from l’Institut des matériaux Jean Rouxel (CNRS/Université de Nantes), in collaboration with Münster Electrochemical Energy Technology (University of Münster, Germany), in order to promote the low-cost, simple, and efficient development of the lithium-ion capacitors used to store electrical energy. This research, published in Advanced Energy Materials on 5 June 2019, will enable the mass marketing of these components.

Electrochemical storage systems for electricity play a central role in the integration of renewable energy sources, and are about to take over the electro-mobility sector. There are two solutions for storing this energy: lithium-ion batteries, which have the advantage of large storage capacity, and capacitors, which have less capacity, but can charge and uncharge very rapidly a great number of times. Lithium-ion capacitors (LIC) combine the best of both worlds.

The materials that make up lithium-ion capacitors do not contain lithium ions (or electrons), unlike batteries. It is therefore necessary to proceed with a prelithiation stage in order to add them, so that the device can function. Two broad strategies are used today: either one of the capacitor’s constituent materials is prelithiated before its integration, or an additive high in lithium ions will redistribute them among the capacitor’s materials during the first charge. Yet these methods are costly and complex, and can diminish the device’s capacity. What’s more, the majority of prelithiation additives available deteriorate when in contact with the air and/or the solvents used to manufacture lithium-ion capacitors. In short, even though some of the solutions that have been proposed function today, there is no “miracle recipe” that is high-performance, sturdy, simple, and inexpensive.

Researchers from l’Institut des matériaux Jean Rouxel (CNRS/Université de Nantes), in collaboration with Münster Electrochemical Energy Technology (University of Münster), met this challenge by using not just one but two additives coupled through consecutive chemical reactions. Their analysis shows that the primary barrier for earlier approaches was their use of a single additive, which had to not only provide lithium ions and electrons, but also meet all of the conditions of price, chemical stability, and performance. The use of two additives each with a specific role, with one providing lithium ions and the other electrons, offers much greater latitude, for they can be selected independently for their price, chemical properties, and performance. When a lithium-ion capacitor is charging, the first additive (pyrene, naturally present in certain types of coal) releases electrons and protons. The second additive, Li3PO4 (mass produced in the glass industry, for instance), captures these protons, and in turn releases lithium ions that are then available for prelithiation.

An additional advantage of this approach is that after prelithiation, the residue of one of the two additives used, pyrene, contributes to the storage of charges, thereby increasing the quantity of electrical energy stored in the device. The efficiency and versatility offered by this new approach opens the way for an inexpensive solution for prelithiation, resulting in lithium-ion capacitors that can store more energy. The breaking of this technological barrier should therefore enable a quicker commercialisation of these devices.