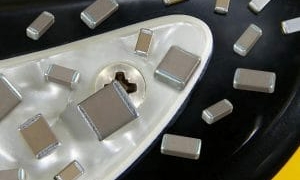 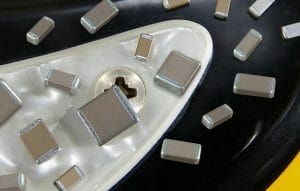 Capacitor specialists in the UK have contributed to an EU research project to develop a lead-free ceramic dielectric, with high energy density and reduced losses, for high temperature applications such as electric vehicles.

Norwich-based researchers at Knowles Capacitors together with the UK’s National Physical Laboratory worked on the project with Euro Support Advanced Materials of the Netherlands.

The major limiting factors for the use of ceramic capacitors in power electronics are size and temperature stability. Ferroelectric ceramics very often exhibit high energy density but fail to provide stable and efficient performance at high temperatures.

The research concentrated on finding a new BiFeO3-SrTiO3 ceramic composition that would yield a lead-free multilayer capacitor design with high thermal stability and energy density with fast discharge rates up to 200°C.

The conclusion of the research resulted in a breakthrough on the development and characterisation of two lead-free compositions based in the BiFeO3-SrTiO3 system.

“Our results indicate that our capacitors are characterised by a very high energy density and an impressive low dielectric loss which will reduce capacitor self-heating under a.c. operation conditions. These ferrite-based capacitors are also characterised by very attractive thermal performance, where small variation of capacitance from room temperature up to 200°C, which combined with their remarkable energy storage properties, makes them very attractive for high temperature applications.”

The aim is to create a high temperature ceramic capacitor that is cost competitive with existing X7R capacitors (125°C maximum temperature and price ~ $0.50).

Knowles Capacitors said it will not work on specific products based on the technology.