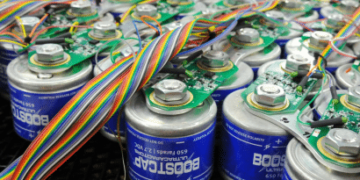 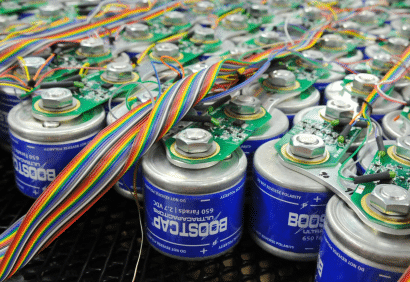 Ultracapacitor makers are looking to vehicle electrification as a way to increase sales, targeting the so-called “micro-hybrid” market rather than plug-in electric vehicles. Manufacturers such as Maxwell Technologies and CAP-XX believe ultracaps could help carmakers overcome several shortcomings of battery-only micro-hybrids, which are internal combustion engine (ICE) vehicles equipped with stop-start and kinetic energy recovery systems (KERS). Micro-hybrids are growing in popularity because they can achieve fuel savings of up to around 25 percent compared to ICE-only models.

Stop-start systems, which shut the engine off when the vehicle stops, can account for up to about 10 percent of the savings. A KERS can make up the rest by recovering energy from braking and using it to power electrical systems and, in some cases, assist the engine.

But micro-hybrids that rely on batteries alone may face problems, according to Stefan Werkstetter, senior field application engineer at Maxwell Power, which supplies ultracaps to carmakers including General Motors and Groupe PSA. Specifically, at temperatures close to 0ºC, lithium-ion batteries don’t perform well and lead-acid products have a “really poor” charging efficiency, Werkstetter said. This could limit the attractiveness of stop-start systems in cold conditions, said Maxwell’s senior manager of product marketing, Jens Keiser. “The users turn them off,” he said. Using an ultracap along with the battery would overcome the problem, he said, since the performance of ultracaps does not degrade at low temperatures. At the same time, ultracaps could help prolong micro-hybrid battery lives by taking care of engine-cranking duties.

Engine cranking requires high currents that can wear batteries out quickly. Research by CAP-XX in 2013 showed that battery life could be doubled by using an ultracap for cranking. In a test based on the New European Driving Cycle at 23ºC, CAP-XX found a battery-only stop-start system would fail after 44,000 starts. When a supercapacitor was added, the level increased to 120,000 starts.

The likely advantages of using ultracaps alongside batteries is leading many manufacturers to seek a slice of the micro-hybrid vehicle market.

Keiser said Maxwell, for example, had been selling systems since 2011 and now had an installed base covering 2.3 million vehicles. Most of these are 12-volt systems, which are “being rolled out aggressively in Europe,” he said.

Yunasko, a Ukrainian ultracap maker that has developed a product with an operating temperature of up to 100ºC, is also hoping to benefit from the micro-hybrid market. “We are expecting to grow,” said project manager Sergii Tychina. “We have some patents in this area,” he added, but “no sales so far.”

There appears to be significant room for growth, though. In Europe, stop-start systems are already fitted to around 60 percent of all new cars, according to a working paper from the International Council on Clean Transportation last year.

And although stop-start cars have been slow to take off in America, by 2028 IHS Markit expects around 67 percent of new U.S. light vehicles to feature the systems.