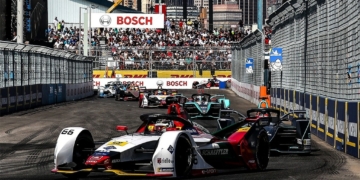 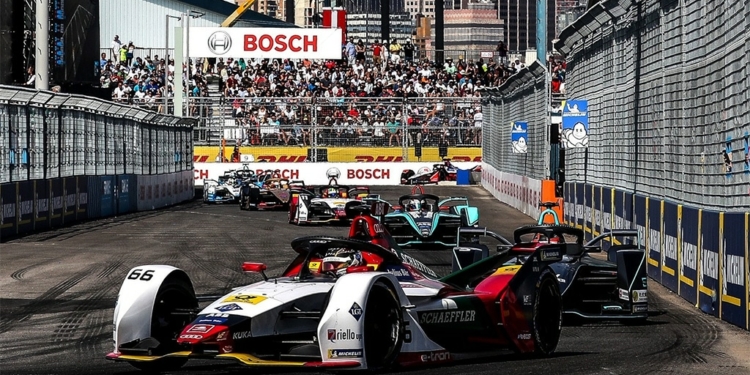 Waldenburg (Germany), 18 July 2019 – The finishing line in New York marked the close of Formula E’s fifth season and the Audi Sport ABT Schaeffler team’s second place in the team standings. Würth Elektronik is delighted with this achievement, as the company has been the team’s technology partner since the first season, providing constant support for the development of the electric racing cars.
Formula E’s fifth season was a rollercoaster ride from the beginning to the end, with Audi Sport ABT Schaeffler drivers Daniel Abt and Lucas di Grassi experiencing defeat and triumphs alike. Lucas di Grassi’s highlights of the season were his wins in Berlin and Mexico City; Daniel Abt stepped onto the winner’s podium in Santiago and Paris.

In the last race of the season, they once again showed what they are capable of. Lucas di Grassi reached third place in the driver standings, and Daniel Abt seventh place.

Oliver Konz, CEO at Würth Elektronik eiSos, congratulated the drivers: “This season has been the most exciting so far, with alternating setbacks and tears of joy. Our drivers and the whole team put in a remarkable performance in every single race and really impressed me each time. We are proud to have been an Audi Sport ABT Schaeffler partner in the battle for the title these past five years, and are now looking forward to season six with more challenges, new locations, and technological and engineering innovations.”

Alexander Gerfer, CEO of Würth Elektronik eiSos, is convinced about the technology partnership with Audi Sport ABT Schaeffler: “It is amazing to see how the Formula E series has progressed and how electromobility has developed over the last five years. We are proud to be contributing our technology and to have supported the team and its drivers since the beginnings in 2014. This season has once again shown that we made the right decision with the technology partnership.”

Würth Elektronik is continuously intensifying the technical cooperation with Audi Sport ABT Schaeffler. New developments for the racing car are already in full swing, primarily to maximize efficiency, optimize performance and further reduce car weight. In addition, the REDCUBE terminals, which have been on board since the second season, will be optimized specifically for use in racing cars. On top of that, improvements are also being made to gate driver transformers and DC/DC converters.

Oliver Opitz, Vice President Wireless Connectivity & Sensors and Technical Coordinator Formula E explains: “We want to offer our partner Audi Sport ABT Schaeffler all the component solutions they need from a single source. We also provide comprehensive technical support and access to our high-tech lab equipment at the Waldenburg headquarters. Together, we want to push developments in electromobility, consistently improve our expertise in this field, and expand our network to gain valuable experience in order to further develop the mobility concepts of the future.”

Würth Elektronik customers also stand to benefit, as the findings from the racing series flow into component development and other enhancements.