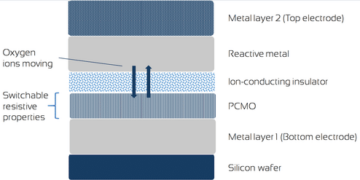 “Crossbar only states that they are using 40nm design rules without disclosing the cell size which means that we can only guess that the linear dimension of the cell size is a multiple of 40nm. It is more important to realize that Crossbar is a filamentary ReRAM technology that is difficult to scale to small geometries,” Guido Amout, CEO and managing director of 4DS, told EE Times.

Flash is reaching the end of its ability to scale linearly, prompting the move to 3D, such as Samsung’s, Toshiba’s and Western Digital’s recent demonstrations of 64-layer stacked-die flash memories.

Fig 1. The bit-cell stack controls its resistance by the migration of oxygen ions between the opposing metal electrodes.
(Source*: TMT Analytics. The report with the diagram can be found here: http://www.tmt-analytics.com.au/4ds-memory.html )

4DS, on the other hand, claims to be one-upping 3D flash by collaborating with Hitachi Global Storage Technologies (HGST is a Western Digital subsidiary) for the last two years. Together they pioneered a better-than-flash Interface Switching ReRAM using a non-filamentary technology with perovskites and migrating oxygen ions to economically give mobile clouds gigabyte storage capabilities. The HGST joint development agreement was renewed in July 2016 for another year in order to optimize its ReRAM’s scalability and cycling endurance, according to 4DS.

Fig.2. 4DS’s target market for its resistive random access memories (ReRAMs) is non-volatile cloud market with aims to give nearly instant access to mobile devices. (Source: 4DS)
4DS also claims to have invested only $12 million to research and develop its recent demonstration chips. The demo chips, 4DS claims, prove its ReRAM memory cells are faster, cheaper and lower power than 3-D flash, giving the company hope at carving out a segment of the $40 billion global market for flash.

* the source of Fig 1 was originally mentioned EE Times and 4DS. However the original source is TMT Analytics, EPCI apologise for incorrect reference.