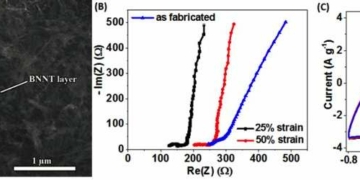 Currently, research in the domain of flexible and stretchable supercapacitors is focused on adjusting electrodes, as they have the most significant effect on performance. However, the separator materials for such applications remain largely unexplored. Recently, a group of scientists from Skoltech and Aalto University (Finland) proposed a novel method for the fabrication of an all-nanotube stretchable supercapacitor from SWCNTs film electrodes and BNNTs separator.

Besides being dielectric, porous and chemically inert, the separators for stretchable supercapacitors need to withstand bending and stretching without severe structural damages. Materials that are known to meet these requirements include polymers and polymer-based electrolytes. However, despite being inexpensive and nontoxic, such materials show poor wetting with aqueous electrolytes and have problems with mechanical strength. Moreover, their high thickness (0.2 mm) results in high internal resistances of the assembled device. In contrast, boron nitride nanotubes (BNNTs), which were used in this work, is a dielectric nanomaterial that shows high Young’s modulus and tensile strength, and thus considered perfect materials for stretchable separator applications. Another key component of the supercapacitors are electrodes, which have to be highly conductive and mechanically stable. In this study, researchers used carbon nanotube films (CNTs) as such material has a unique pore structure, high specific surface area, low electrical resistivity and high chemical stability, and exceptionally high Young’s modulus of elasticity and tensile strength.

The BNNT separator of only 0.5 µm thickness ensured reliable short circuit protection and low equivalent series resistance (ESR) of the stretchable supercapacitor (SSC). The device, fabricated in a test cell configuration for material characterization retains 96 percent of its initial capacitance after 20 000 charging/discharging cycles with low equivalent series resistance of 4.6 Ω. The stretchable supercapacitor prototype withstands at least 1000 cycles of 50 percent strain with a slight increase in the volumetric capacitance and volumetric power density from 32 mW cm−3 to 40 mW cm−3 after stretching, which is higher than reported before. Moreover, a low resistance of 250 Ω for the as-fabricated stretchable prototype was obtained. The simple fabrication process of such devices can be easily extended, making the all-nanotube stretchable supercapacitors, presented here, promising elements in future wearable devices.

“In this work, we applied thin films of SWCNTs as the electrodes and BNNTs as the separator to fabricate all-nanotube stretchable supercapacitors. We chose to use the SWCNT and BNNT films together due to several important qualities, such as lattice structures, which strengthen the material between the walls of both materials and make it possible to test and characterize the device under mechanical stretching. We also successfully solved the problem of separator thickness and resistance keeping elastic properties of the device,” said Skoltech Ph.D. student Evgenia Gilshteyn, the study’s lead author.

Skoltech Professor Albert Nasibulin added: “The technology of the SSC fabrication is very simple, as it is based on dry deposition transferring and airbrushing techniques. With its stable performance, the device could act as a promising candidate for wearable electronic devices and flexible energy storage systems.”