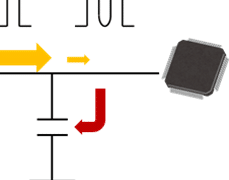 Comparison of Chip Capacitors and Chip Varistors in Electrostatic Countermeasures

Comparison of Chip Capacitors and Chip Varistors in Electrostatic Countermeasures 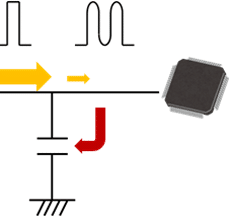 Fig. 1 Signal waveform distortion due to difference in communication speed

Table 1 Features of each protection component

Fig. 2 ESD waveform (ESD absorption waveform) in a circuit incorporating each ESD protection element
Fig. 2 shows the ESD absorption waveform when each protection component is used. Based on IEC61000-4-2, an ESD waveform was generated using an HBM (Human Body Model) and the electrostatic absorption capability of each protection components was evaluated. The horizontal axis represents time (ns), and the vertical axis represents voltage (V). This voltage is considered to be the voltage that is applied to the IC when static electricity is generated, and the smaller the voltage, the higher the protection capability from static electricity.

Fig. 3 Map of the best suited protection component for each applicationChip varistors are available in the AVRM series and AVRL series.

On the other hand, the feature of the AVRL series is low capacitance. As a result, in faster transmission lines between 50Mbps and 1Gbps, products in this series demonstrate higher electrostatic absorption than ESD suppressors.

Faster systems such as USB, LVDS, MIPI, and HDMI and automotive applications such as MOST, PoDL, and Ethernet are optimal applications including.
The features of chip protectors are low capacitance and high electrostatic absorption capability, and they are suitable as replacements for TVS diodes.
In transmission lines between 50Mbps and 500Mbps, chip protectors demonstrate electrostatic absorption which is not only higher than ESD suppressors, but even higher than the AVRL series.

Fig.5 ESD absorption waveforms of an MLCC and MLV having the same capacitance

The peak voltage was as low as 37 V with an MLV, while it was 662 V with an MLCC. As was previously described, an MLCC accumulates electricity inside the element when static electricity is applied. For this reason, a large capacitance is required in order to obtain a high electrostatic absorption capability. On the other hand, an MLV has a property in which the resistance of the element itself decreases when overvoltage is applied, and thus does not require high capacitance. When the capacitance is the same, an MLV has a much higher electrostatic protection capability compared to an MLCC. Therefore, when MLCCs cannot be used due to a restriction by capacitance, it is recommended that MLVs be used.

Selection Point for MLVs
The key points for selecting MLVs as a electrostatic countermeasure are described in the following. The primary focus should be given to increasing the ESD endurance of equipment. By selecting a product with the lowest varistor voltage to the extent possible, an excellent electrostatic absorption capability can be obtained; however, it is necessary to select an optimum value according to the circuit voltage value. In addition, when the varistor voltage is the same, the electrostatic absorption capability and electrostatic durability becomes greater as the capacitance becomes larger. However, the signal quality deteriorates as the capacitance becomes larger, as in the case of an MLCC; therefore, a product with the largest capacitance that will not affect the signal quality should be selected. The product lineup of the chip varistors of TDK is shown in Table 2.

Table. 2 The product lineup of the chip varistors of TDK