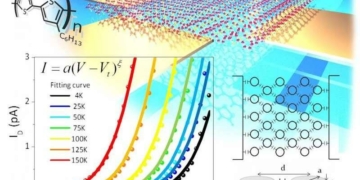 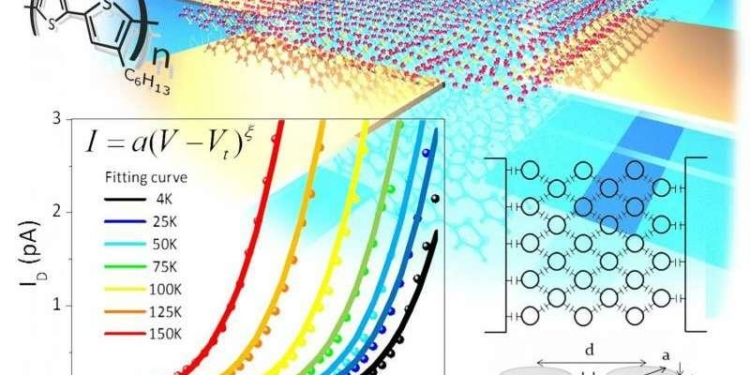 Generally, organic conductors has disorder structures so charge transfers from one place with high conductivity to another place with high conductivity. In such occasions, Coulomb blockade of charge transport takes place. It was thought that Coulomb blockade took place in low dimensional aggregates of inorganic particulates only at very low temperatures.

A research group of Osaka University succeeded in showing experimental evidence to prove Coulomb blockade taking place on two-dimensional organic conducting polymer films, a world first. They also demonstrated its theoretical evidence through quantum calculations and the verification of conductivity models of experimental results. This group’s research results will possibly overturn conventional understanding of conduction mechanism of organic conductors and help one to understand and design properties of organic and molecular devices.

Organic devices have grown remarkably. Among them, conductive polymers in particular are synthesized from inexpensive carbon-based low molecules, and their properties can be changed into metals, semiconductors, and insulators by changing their structure and doping to be used for various devices. Despite these diverse properties, electric conduction properties of organic conductors have not yet been fully understood and nonlinear conductivity at low temperatures has been a mystery.

Low temperature properties are very important in learning the essence of conduction. In organic materials, peculiar nonlinearity to current voltage, which is different from that of inorganics appears. . Many researchers have tried to explain the nonlinear conductivity, but a general and comprehensive explanation has not been achieved. Nonlinear conductivity has been considered one of the mysteries of organic condensed matter physics.

A group of researchers led by Megumi Akai-Kasaya, Assistant Professor, and Yuji Kuwahara, Professor, at Osaka University created a sheet of two-dimensional ultrathin-films of regularly arranged hexylthiophene (P3HT) monolayers and attached the sheet of about 1-nm monolayer to a metal electrode with a gap of less than a micrometer and measured electrical conductivity. The current flowing in the molecular membrane showed the temperature-dependent threshold voltage in the low temperature range of 150K—4K and increased in power law of the current-voltage beyond the threshold. This is a typical feature of Coulomb blockade. This group theoretically verified the onset of two-dimensional Coulomb blockade in the organic thin film through the calculation of the delocalization of electric charge in the molecular film and the verification of a distribution model of conductive segment in the two-dimensional film.