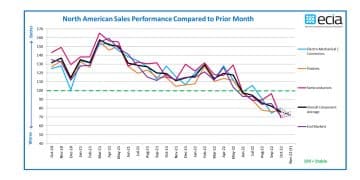 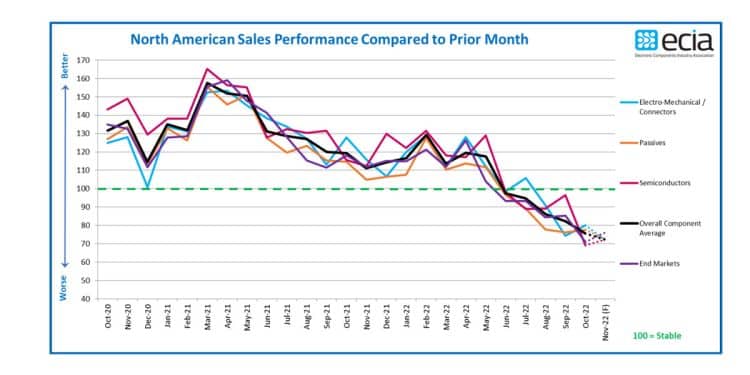 A precipitous drop in sales sentiment for semiconductors dragged the overall component sentiment index down in October 2022 despite modest improvements in the Electro-Mechanical and Passive Component Indices according to ECIA survey on North American electronic component sales.

The index for semiconductors collapsed from 96.4 in September to 69.2 in October. While memory ICs could be seen as the main driver of this drop in semiconductor sales sentiment, the fact is that every semiconductor subcategory saw double digit declines in October ranging from 14 to 28 points down. By contrast, all other component subcategories except for Capacitors saw modest improvement in October.

Capacitors only saw a minor dip in sentiment. Measurements below the benchmark level of 100 indicate negative sales growth sentiment. By contrast, the November outlook points to a drop in sales sentiment for all Electro-Mechanical and Passive component subcategories while Semiconductors rebound slightly. This results in a very closely aligned outlook for all three categories around 72.2 index points in November.

The electronics component index has now fallen to its lowest point since the beginning of the index in October 2019 except for one month in May 2020. Including the November outlook, the index has fallen continuously since April 2022 with an average monthly decline of 6.8 points.

As noted previously, after a robust period of growth, the market is clearly on the back side of the cycle. A range of economic indicators reflect increasing concerns, and most manufacturing executives anticipate a recession by some point in 2023. Overall, it is expected that the markets will continue to experience a weakening trend.

For the first time since the beginning of the monthly ECST survey, the Avionics/Military/Space index fell below 100 in October. At the same time, the Automotive and Industrial markets saw sharp declines in sentiment. The October index and November outlook show the index for every end market below 100 for the first time. The Consumer and Computer Electronics indices hit new all-time lows with both falling below 50 for the first time. Mobile phones continued their weak performance at around 60 in October and November. The broad-based declines in the market continue through the November outlook with Avionics/Military/Space even dropping under 90 points. All other markets are substantially below that level. The current trends point to a weak end-market through the end of 2022.

The combination of improved supply chain conditions and weak trending sales continues to benefit the lead time picture significantly. The percentage of survey participants seeing decreasing lead times in the Passive Components segments improved significantly to 38% in October. Semiconductors saw a substantial improvement in the measurement of increasing lead times as the percentage was cut in half from 20% to 10% in October. All three component segments show continuing improvement in the lead time picture. The lead time trend is the most positive aspect of the most recent ECST reports.