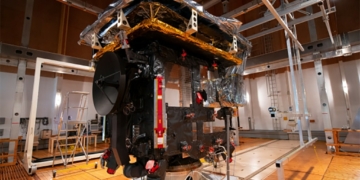 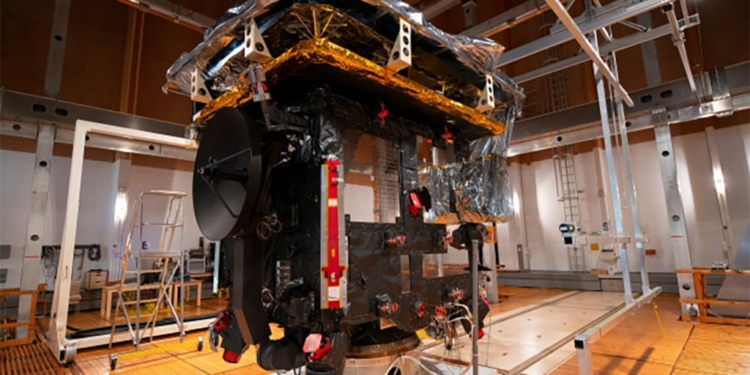 An important stage in the development of ESA’s Solar Orbiter mission was successfully completed, when a series of tests to validate the electromagnetic compatibility and magnetic properties was carried out on the spacecraft’s flight model. The mission require extra ordinary EMC and magnetic field strength from all mechanical and electrical components on board including passive components.

After shipment from prime contractor Airbus Defence and Space in Stevenage, UK, last year, the Solar Orbiter spacecraft has been undergoing a series of tests at the premises of IABG in Ottobrunn, Germany, testing its thermal and mechanical properties, the deployment of several elements, and most recently its electromagnetic compatibility (EMC) and magnetic behaviour.

The EMC testing took place in an anechoic chamber at IABG, where the spacecraft was isolated from external electromagnetic interference. The chamber walls are covered with thousands of pointy pyramids that fully absorb reflections of electromagnetic waves, muting also any sound echoes and creating an eerie silence. Performed between 8 and 22 May, these tests were needed to verify that the spacecraft’s electrical equipment will be fully electromagnetically compatible throughout all phases of the mission.

Electromagnetic compatibility is a key aspect of any space mission, because electrical and electronic equipment can be a source of electromagnetic emissions and/or sensitive to such emissions, so the compatibility between the various onboard emission sources and their susceptibilities needs to be verified before launch from the Cape Canaveral launch site in Florida, USA

Analysis of the test data showed that the spacecraft meets the EMC requirements with respect to interactions with the TT&C subsystems onboard and with external equipment during launch. Analysis of the EMC test for the RPW instrument yielded results that were consistent with prior expectation from unit level testing and analysis, but further characterisation will be necessary during in-flight and in-orbit commissioning.

While most spacecraft undergo only EMC testing, missions that involve measuring magnetic fields in space with exquisite accuracy – such as Solar Orbiter, which will measure the magnetic field of the solar wind with its Magnetometer (MAG) and with the SCM component of the RPW instrument, or magnetospheric plasma missions like ESA’s Cluster and Swarm – require an additional set of tests to fully characterise their magnetic properties.

These tests were conducted in a unique facility, the magnetic field simulation facility (MFSA), located just outside the IABG premises in a nearby forest to avoid interference with human-generated magnetic fields. In addition to that, the facility consists completely of non-magnetic materials like wood, and contains twelve 15-m coils – nearly as large as the building – to create a homogeneous magnetic environment that compensates Earth’s own magnetic field, simulating outer space conditions.

The analysis of the magnetic tests indicates that the mission requirements were met within the limits of the testing facility. After launch, in the even quieter environment of space, further measurements during the commissioning phase will complement the results of these tests to fully characterise the magnetic properties of the spacecraft.

The spacecraft electromagnetic compatibility and magnetic cleanliness are especially important aspects for the science that Solar Orbiter will perform, not only for the RPW (EMC aspects) and MAG (magnetic properties) instruments. They are also key elements for the two particle detector instruments on board – the Solar Wind Plasma Analyser (SWA) and the Energetic Particles Detector (EPD) – in order to reconstruct the path of incoming particles that might be deflected by any residual spacecraft electric or magnetic field.

Solar Orbiter’s mission is to perform unprecedented close-up observations of the Sun. Its unique orbit will allow scientists to study the Sun and its corona in much more detail than previously possible, and to observe specific features for longer periods than can ever be reached by any spacecraft circling the Earth. In addition, Solar Orbiter will measure the solar wind close to the Sun, and provide high-resolution images of the uncharted polar regions of the Sun.

It will carry 10 state-of-the-art instruments. Remote sensing payloads will perform high-resolution imaging of the Sun’s atmosphere – the corona – as well as the solar disk. Other instruments will measure the solar wind and the solar magnetic fields in the vicinity of the orbiter. This will give us unprecedented insight into how our parent star works, and how we can better predict periods of stormy space weather, which are related to coronal mass ejections (CMEs) that the Sun throws our way from time to time.

Scheduled for launch in February 2020, Solar Orbiter will take just under two years to reach its initial operational orbit, taking advantage of gravity-assist flybys of Earth and Venus, and will subsequently enter a highly elliptical orbit around the Sun.

Solar Orbiter is an ESA-led mission with strong NASA participation.