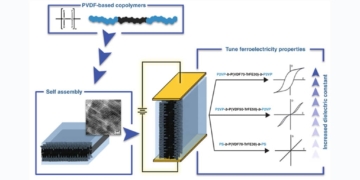 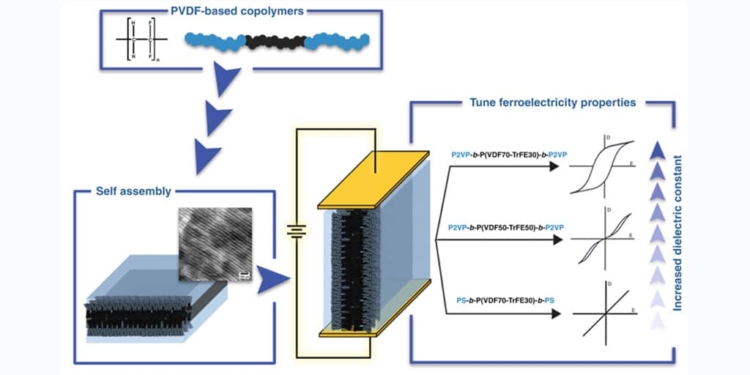 The ferroelectric polymer PVDF (polyvinylidene fluoride) has interesting properties and could be used to store information or energy. One of the main drawbacks of PVDF is that extra functional groups added to improve certain properties also interfere with its ferroelectricity.

To solve this, scientists from the University of Groningen have created block copolymers from PVDF that leave its ferroelectricity intact, but allow them to tune its characteristics. They wanted not only to study how this polymer works, but also to widen its use to include flexible organic electronics. The results were published in the journal Nature Communications on 6 February.

PVDF polymers possess polar structures with dipoles that can be aligned with the application of an electric field. The orientation of the dipoles can be reversed by changing the direction of the electric field. The material thus shows switchable behavior, which means it could be used for information storage. The presence of dipoles in PVDF and its high dielectric constant means that energy storage in capacitors could also be an option, although its ferroelectricity would reduce the efficiency of such capacitors.

Modification of the material might solve this issue. “However, modifying the molecules by attaching side chains affects their ferroelectric properties,” explains Ivan Terzic, a Ph.D. student at the University of Groningen’s Department of Polymer Science and co-first author of the Nature Communications paper.

Together with his fellow Ph.D. student Niels Meereboer and their supervisor, Professor Katja Loos, Terzic devised a way to produce a copolymer of vinylidene fluoride and trifluoroethylene with a functionalized end group that can be linked to an insulating polymer chain to form a block copolymer. Next, the scientists showed that the material forms small domains at nanometre scales through phase separation between the blocks. These domains take different shapes—lamellar, cylindrical or spherical, for instance—depending on the ratio between the blocks.

Terzic says, “Others have tried to prepare PVDF block copolymers, but they could only produce blocks with short polymer chains. In that case, the blocks mix and show no phase separation.”

Terzic used block copolymers to improve the interactions between PVDF and inorganic nano-objects and to improve their dispersion of inside the polymer. For example, magnetic nanoparticles can be added to the PVDF to produce a multiferroic material that has both ferroelectric and ferromagnetic properties, which means it can be coupled. Furthermore, changing the behavior of PVDF could make energy retrieval more efficient. “That would allow us to make a highly efficient capacitator that could be used wherever stored energy needs to be released fast, like in defibrillators or to convert direct current from solar panels to alternating current.”

The authors have created a toolbox for the production of PVDF-based block copolymers with tunable properties. “We can use this to increase our understanding of the ferroelectric and other properties of PVDF, but also for new applications,” says Terzic. “The organic PVDF is flexible, lightweight and non-toxic, in contrast to some inorganic ferroelectrics that often contain lead. And it is bio-compatible, so medical applications are another interesting possibility.”

Provided by: University of Groningen

featured image: A block copolymer of PVDF (black) and an insulating polymer chain (blue) form a block copolymer. Through phase separation, the blocks assemble in films. The dielectric properties can be tuned by varying composition and length of the blocks. Credit: Department of Polymer Science, University of Groningen