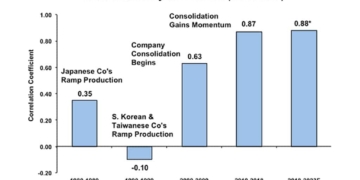 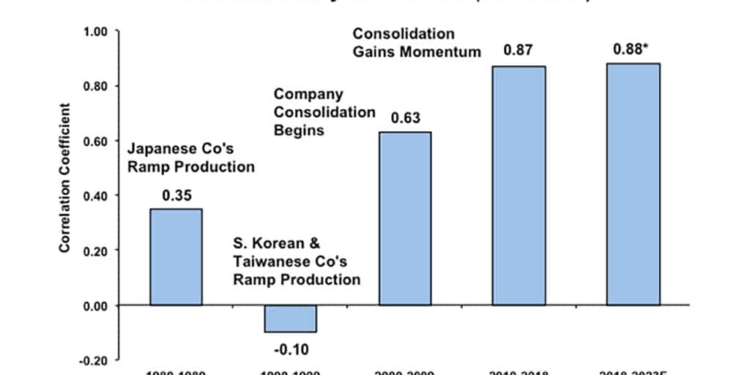 IC Insights believes that the increasing number of mergers and acquisitions, leading to fewer major IC manufacturers and suppliers, is one of major changes in the supply base that illustrate the maturing of the industry and helping foster a closer correlation between worldwide GDP growth and IC market growth.

The 2018-2023 global GDP and IC market correlation coefficient will reach 0.88 (0.94 when excluding memory), up from 0.87 in the 2010-2018 time period., says IC Insights. The increasingly close correlation between worldwide GDP growth and IC market growth through 2018, as well as its forecast through 2023 is shown below:

Another reason for a better correlation between worldwide GDP growth and the IC market growth is the continued movement to a more consumer driven IC market.

Twenty years ago about 60% of the IC market was driven by business applications and 40% by consumer applications, but those percentages are reversed today. As a result, with a more consumer-oriented environment driving electronic system sales, and in turn IC market growth, the health of the worldwide economy is increasingly important in gauging IC market trends.