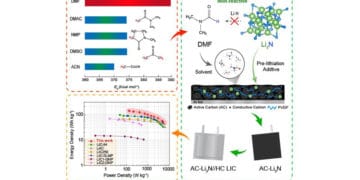 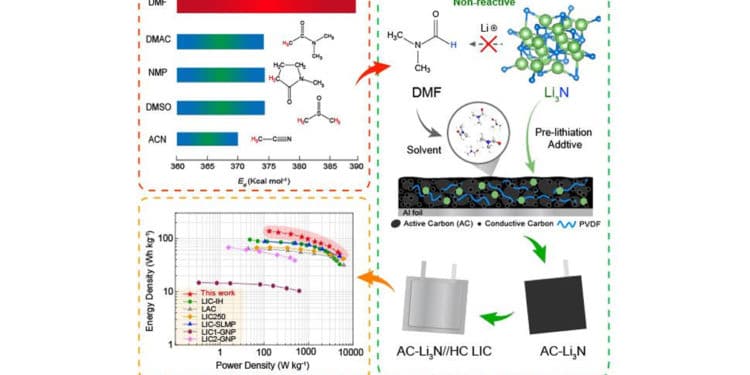 This work provides a commercially adoptable route to prepare Li3N containing electrode, using low toxic and high boiling point N,N-dimethylformamide (DMF) to homogenate the electrode slurry. The stabilization mechanism of Li3N in DMF solvent is found closely related with its dehydrogenation energy, which is much larger than other commonly used solvents such as N-methy-2-pyrrolidone (NMP), dimethylacetamide (DMAC), dimethyl sulfoxide (DMSO) and Acetonitrile (ACN). As a result, researchers successfully manufactured a soft package lithium ion hybrid capacitors, which exhibits excellent energy density and power density as high as 130.1 Wh/kg and 5056.9 W/kg based on all active materials.

Lithium nitride is a well-known positive pre-lithiation additive that can be used to compensate for the irreversible lithium loss that occurs on the negative side during the first charge, thereby increasing the specific energy of the energy storage device. However, in the electrode manufacturing process, lithium nitride would react with the most commonly used solvent, such as N-methyl-2-pyrrolidone (NMP), dimethyl sulfoxide (DMSO), acetonitrile (ACN) and N,N-dimethylacetamide (DMAC). The side reactions make it difficult to manufacture the lithium nitride containing electrode in scale. In this work, it was found that N,N-dimethylformamide (DMF) can be used as a homogenizing solvent to prepare a stable lithium nitride-containing slurry and electrode. Then the problem is solved.

The electrode can realize pre-lithiation of the lithium ion supercapacitor negative electrode, greatly improve the specific energy of the device, and maintain excellent rate performance and cycle stability. The energy retention remains 90% after 10,000 cycles. This technology is expected to find application in other battery systems with low initial efficiency in anode (hard carbon, silicon, etc.)

This work was reported in Science Bulletin, entitled “DMF stabilized Li3N slurry for manufacturing self-prelithiatable lithium-ion capacitor” by Prof. Zhang Hongzhang and Li Xianfeng’s group in Dalian Institute of Chemical Physics, Chinese Academy of Sciences. The researchers studied the common polar solvents and found that the presence of α-H is the main factor affecting the instability of the solvent on the surface of lithium nitride.