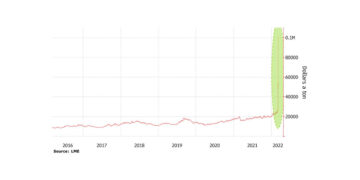 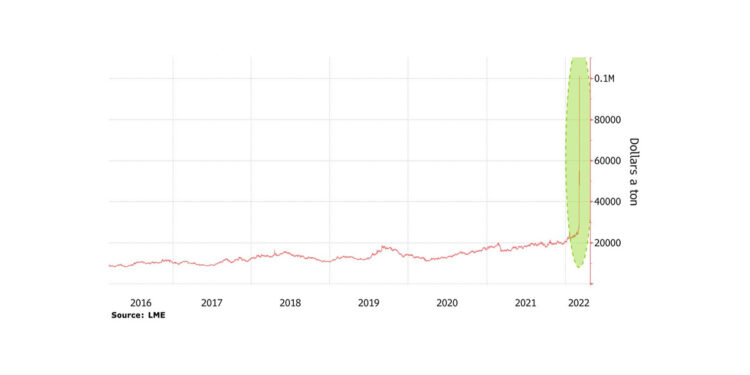 The London Metal Exchange suspended trading in its nickel market after an unprecedented price spike left brokers struggling to pay margin calls against unprofitable short positions, in a massive squeeze that has embroiled the largest nickel producer as well as a major Chinese bank.

Nickel, used in stainless steel, electric-vehicle batteries and electronic components, surged as much as 250% in two days to trade briefly above $100,000 a ton early Tuesday. The frenzied move — the largest-ever on the LME — came as investors and industrial users who had sold the metal scrambled to buy the contracts back after prices initially rallied on concerns about supplies from Russia.

Activity in the nickel market was suspended as trading got underway in London on Tuesday, and the LME later said it would cancel all nickel transactions that had taken place earlier in the day.

The run on nickel was instigated by Russia’s invasion of Ukraine, and made worse by its subsequent decision to ban commodity exports in response to sanctions from the U.S. and its allies.

Russia accounted for roughly 9.2% of the world’s total nickel mine production in 2021, and holds 7.5 million tonnes of the metal in reserves, according to the U.S. Geological Survey. If Russia moves forward with its decision to ban nickel commodity exports, it means supply constraints for the metal are inevitable.

News of the sudden supply drop in nickel led manufacturers of electric vehicle batteries and electronic components to race to seek reserves, as the metal is a critical commodity in the production of lithium-ion battery cells. It is expected that the trade will be re-opened in few days, and the price will fall down, nevertheless the bad message is that it may not return to its original level. BloombergNEF research estimated that a 100kW EV battery requires around 66kg of nickel, at 2021 price level it represented around 1200 dollars per battery pack.