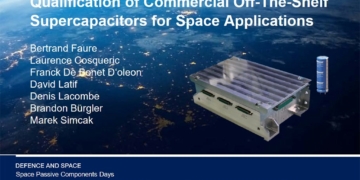 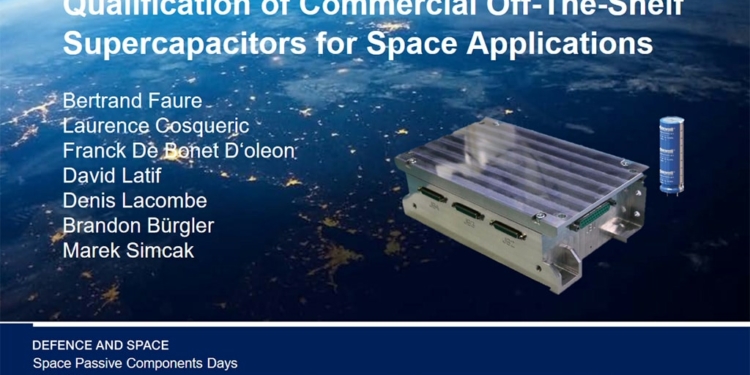 Supercapacitor is a product which fills the gap between batteries and capacitors, featuring very high power density (up to 100kW/kg) with lower stored energy than that of batteries (up to 7 Wh/kg). This technology is already widely used in various industrial, automotive and aeronautic applications.

Its fast charge and discharge time, its ability to withstand millions of charge / discharge cycles and its wide range of operational temperature (-40°C to +70°C) makes it a perfect candidate for several space applications (launchers and satellites) as demonstrated in ESA Study Contract No. 21814/08/NL/LvH entitled “High Power Battery Supercapacitor study” completed in 2010 by Airbus D&S.

From the most promising ones, it can be quoted: optimization of pyrotechnical activation system, high power mechanisms, electrical thrust vector control, high power radar supply or even hybridization of Supercapacitor banks with Li-Ion batteries. The number of known flight demonstration is very low. This is partially linked to the fact that there are currently no parts available at space grade.

Components selected and frame of the activity

A previous activity [1] has demonstrated the interest and suitability of COTS supercapacitors for space applications. In particular, this activity has highlighted the excellent performances of the 10F components from Nesscap® in terms of ageing when submitted to life test and space environments including vacuum at both cell and system levels and enabled to identify the part as a good candidate for future space qualification.

Nesscap® is a company based in Korea which has manufactured for more than 10 years a wide range of high performances supercapacitors used in several industrial domains. Nesscap® has improved the 10F part to enhance its sealing performances including urethane coating around leads, anodization of the lead part attached to the electrode and improvement of the rubber bung. This improved XP product was released to the general public (available in mass production) in April 2016. Moreover, in case of any change in the material, process or design of the part, Nesscap® will submit a PCN for approval.

In 2017, Maxwell acquired Nesscap. But former Nesscap products are going to be continued as before. Only the sleeve will change and both part numbers (Maxwell & Nesscap PN) will be printed. The products will stay in production in the Korea facility. The new name of the component ESHSR-0010C0-002R7UC will become BCAP0010 P270 X01 (see Fig.2.).

Screening tests
In the frame of the activity, a batch of 3.000 parts of Nesscap® EHSR 0010C0-002R7UC has been procured.
The first step of the activity consists in parts screening.

For that purpose, EGGO Space has developed specific test facilities so that to perform the screening of a 200 parts batch in one month.

All the tests have successfully been passed. The only test that is on-going is the vacuum life test on 800 parts.

After 11 000h of life test without failure, the reliability rate demonstrated is 32 FIT for one supercapacitor.

Next steps
The vaccum testing for MTBF determination will continue up to 18000 hours.
Two specifications are being currently written at ESCC template :

In the frame of the project entitled “Generic Space Qualification of 10F Nesscap Supercapacitors”, a development and qualification of associated BOSC based on Nesscap 10F is on-going. A generic and modular unit including components parallel/series arrangements compatible with several space systems has been designed.

Electrical testing of EM BOSC
An EM BOSC has been manufactured and tested electrically.

The BOSC behaves as expected and the main testing conclusions are reported below:

Supercapacitors are quite sensitive components to mechanical stress, especially if applied to their leads. Some kind of mechanical fixing to the PCB had to be solved, to avoid any mechanical stress. It was quite challenging to take into account all the aspects of the specific requirements, manufacturability and repeatability of the manufacturing process, all in accordance with ECSS standards to obtain final product with maximum quality.

Potting was chosen as the only possible solution, especially due to limited physical dimensions, which were required. Potting ensures appropriate mechanical fixing of the supercapacitors and provides thermal interface to withdraw heat from the capacitors. Thermally conductive potting material can easily withdraw the supercapacitor’s heat and transfer it into the satellite structure. Heat transfer out of the BOSC unit was also crucial to consider as supercapacitors have limited operating temperature range (‐40°C up to +65°C). Keeping the temperature as low as possible also extends life of the unit and slows down the supercapacitors ageing.

The test campaign on 10F NESSCAP® supercapacitors for the entry in EPPL II is successful. The bank Of Supercapacitors based on Nesscap® is under development and will be submitted to qualifications tests.

If successful, this study will allow having the Nesscap® 10F product space qualified and available on the shelf at both component and unit levels with a TRL level of 7. The completion of the proposed study will enable new applications or developments involving supercapacitors. The proposed study appears then to be of great interest for European space industry.

The targeted customers are prime contractors or equipment manufacturers that need either a complete BOSC (from CSRC) or only screened supercapacitors components (from EGGO).
This project will put into place a European industrial supply chain for supercapacitors products at space grade that will enable its utilization for space. It will also develop skills and facilities in space developments at both CSRC and EGGO Space levels, useful for this product and for future ones.