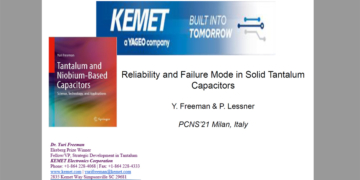 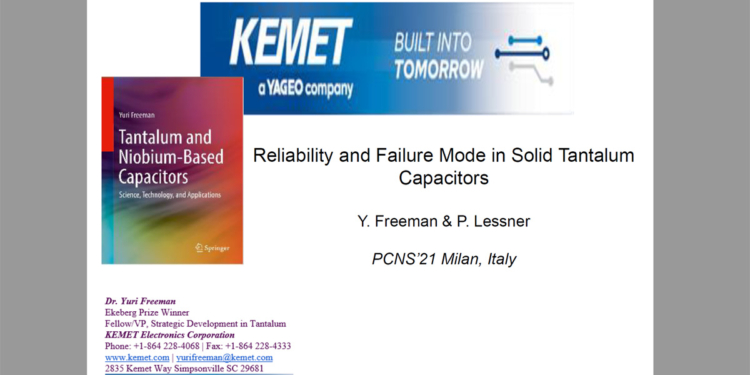 The reliability and failure modes in surface mount Solid Electrolytic and Polymer Tantalum capacitors were investigated using the parts manufactured with conventional technology and flawless technology (F-Tech) that suppresses typical defects such as crystalline inclusions in the amorphous matrix of the tantalum oxide dielectric.

The paper was presented by Yuri Freeman, KEMET Electronics Corporation. USA at the 3rd PCNS 7-10th September 2021, Milano, Italy as paper No.2.1.

Additionally, the MnO2 cathode also provides strong self-healing properties to the Solid Electrolytic Tantalum capacitors due to the phase transformation into low manganese oxides (Mn2O3, Mn3O4, MnO) under the heat released in the defect sites in the dielectric that have high leakage current density (Fig. 1). The unique property of the manganese oxides is that they sharply increase resistivity as they release oxygen and transform from higher into lower manganese oxide (Fig. 2), while oxides of almost all the other metals reduce resistivity as they transform from higher to lower oxides.

Resistive low manganese oxides block current flow through the defect sites in the dielectric, which is critical for the reliability of the Solid Electrolytic Tantalum capacitors.

The AC characteristics of Solid Electrolytic Tantalum capacitors are superior to these in Wet Tantalum capacitors where low mobility of ions in the liquid electrolyte cathode cause high equivalent series resistance (ESR) and related rapid capacitance loss with frequency, especially at low temperatures. A combination of the stable DC and AC characteristics with high volumetric efficiency in terms of charge (Q/cc) and energy (E/cc) and high reliability (the cumulative failure rate is decreasing with time) provided steady increase in applications of Solid Electrolytic Tantalum capacitors since their mass manufacturing was initiated in the US by Sprague Electric in 1954 and until early 2000s.

To reduce the risk of failure in Solid Electrolytic Tantalum capacitors, 50% derating (Va/Vr = ½) was recommended.6 and accepted for most applications. The 50% derating causes about 10x loss in volumetric efficiency due to a combination of the thicker dielectric and lower anode surface area since larger tantalum particles, coarser tantalum powders, are needed to form the thicker dielectric. As an example, Fig. 3 shows Tantalum capacitors B-case 4.7 uF – 25 V (no de-rating) and D-case 4.7 uF – 50 V (50% de-rating).

Besides the loss in volumetric efficiency, increasing thickness of the dielectric due to de-rating can cause larger density and size of the defect sites in the dielectric (Fig. 4) that affect the reliability of Tantalum capacitors [7].

In this paper the reliability and failure mode in surface mount Solid Electrolytic and Polymer Tantalum capacitors were investigated on the parts manufactured with conventional technology and flawless technology (F-Tech).7  Flawless technology suppresses typical defects such as crystalline inclusions in the amorphous matrix of the Ta2O5 dielectric that continue growth during the capacitor testing and field applications eventually causing cracks in the dielectric and capacitor failures. The critical part of the F-Tech is reducing bulk oxygen content in tantalum anodes that promotes formation of the crystalline seeds at the anode-dielectric interface. Reducing the oxygen content in tantalum anodes in F-Tech is achieved either by treatment of the sintered in vacuum tantalum anodes in deoxidizing atmosphere, such as magnesium vapor, or by sintering of the pressed tantalum powder pellets in a deoxidizing atmosphere (F-Tech with deox-sintering).