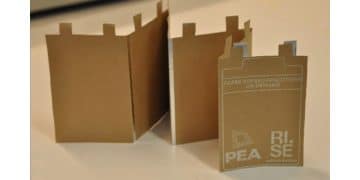 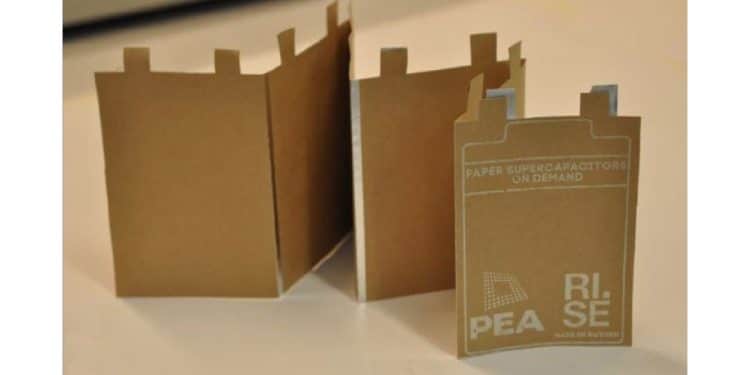 The active ingredient of the capacitor is a water-based ink made from the conductive polymer PEDOT:PSS and cellulose pulp derived from softwood, plus some other ingredients including activated carbon.

The individual device showed impressive capacity up to 10 F while increasing the area with the large parallel device increased the capacitance to a record 127.8 F (332.8 mF/cm2).

Previously, the Center screen-printed this onto an aluminium-coated plastic substrate, but in this most recent demonstration it moved to a commercial aluminium-coated paper substrate, making this a truly paper supercapactitor. The aluminium acts as a current collector, and also to exclude moisture and oxygen. Carbon layers printed over the metal protect it from corrosion inside the cell to improve operating life. In the demonstration, the capacitors were hand-made using a multi-step process that mimicked a potential production process, ending in heat-sealing printed substrates around a electrolyte-soaked fibres to complete the capacitors.

As these are based on a paper used in construction – to insulate saunas. “These energy storage devices could, for instance, be built into the walls of buildings to store energy locally from solar cells on the roof while at the same time functioning as insulation for the building,” said Robert Brooke, a researcher at RISE (Research Institutes of Sweden), with which the Digital Cellulose Center worked.

The demonstration devices are physically designed to be easily connected in series for higher voltages, and also designed to be split into four smaller supercapacitors (see photo).

“If you have a small electronic device that needs minimal power, then you can use an individual sheet of the energy storage device,” said Brooke. “If you want to power something that needs more, then you can connect a devices, or sheets, to increase the voltage or the capacitance.”

The device showed capacity up to 10F “while expanding the area with the large parallel device increased the capacitance to a record 127.8F, which is 332.8mF/cm2” according to the Center.

Self-discharge had open-circuit voltage dropping from 800mV to 500mV over 24 hours, and an initial study of stability showed little change in capacitance after 1,000 charge-discharge cycles between 0V and 800mV at 75mA.

Higher voltage use is possible, and four in series could used at 5V said the Center.

In a further demonstration, paper supercapacitors were combined with an all-printed electrochromic display showing the city of Norrkoping, in an art installation dubbed ‘Norrkoping Starry Night’. It is charged by silicon solar cells and has a touch sensor to turn it on and off.