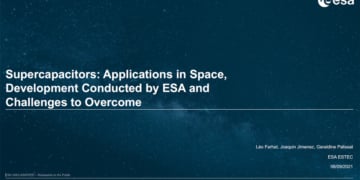 Supercapacitors: Applications in Space, Development Conducted by ESA and Challenges to Overcome

Supercapacitors: Applications in Space, Development Conducted by ESA and Challenges to Overcome 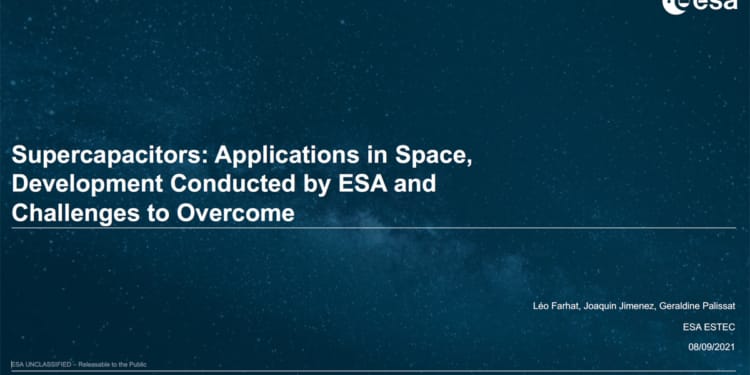 Since almost a decade, supercapacitors (SC) were identified as promising high-power sources as they can bridge the gap between capacitors and batteries. SC have been found to be potentially attractive for several space power applications. ESA has conducted several activities for developing supercapacitors for space applications. In this paper, an overview of identified space applications for SC will be provided, the conclusions of recent development activities funded and led by ESA will be shared. Finally, the challenges of providing a high reliable space solution will be listed as well.

The paper was presented by Joaquín José Jiménez Carreira, HE Space Operations B.V. for ESA/ESTEC, Noordwijk, the Netherlands at the 3rd PCNS 7-10th September 2021, Milano, Italy as paper No.2.4.

Technology advances in power and energy storage offer significant benefits to the space sector spacecraft, launch vehicles, landers, rovers, spacesuits, tools, habitats, communication networks, and anything that requires power and energy make use of these technologies. Such advances may even enable space missions that were previously considered technically unattainable.

As far as the energy storage is concerned, the primary goal for any energy storage technology is to provide power at the highest possible specific energy with sufficient durability in the mission environment and, in the case of rechargeable technologies, sufficient life cycle. Battery systems are based on electro-chemical storage reactions (redox reactions and intercalation reactions) and they are used in all space missions for providing power in a multitude of systems. State of the art primary and secondary batteries are heavy and bulky, due to the fact that the intrinsic energy and power capabilities of the battery technology are not easy to adjust to the power supply needs. Indeed, for high power applications, batteries are generally oversized in energy. Similarly, for high energy applications, the batteries are generally oversized in power. Furthermore, battery systems are facing with various safety issues due to the reactivity of the electrode materials and the interactions between the electrode materials and the electrolyte, especially for the lithium-ion battery cells [1].

Capacitors are another class of energy storage device. Capacitors are passive two-terminal electrical components used to electrostatically store energy in an electric field. Unlike batteries, capacitors do not dissipate energy and employ nonfaradic processes to store charge. Therefore, they achieve far longer life cycle and outstanding power density. Their specific energy, however, is very low compared to batteries. This fact, among others, helped the development of the supercapacitors. Supercapacitors are electrochemical storage devices which can store electric energy in the electrochemical double layer between high surface area electrodes and an electrolyte. Supercapacitors store 10 to 100 times more energy per unit of mass or volume than regular capacitors. The advantages of supercapacitors are their high power density (several tens of kW/kg), the capability of operating at low temperatures (down to -40ºC), the large instantaneous discharge capability, the high life cycle and the fast recharge capability.

Supercapacitors have lately captured the attention for power applications in space environment. They can support pulses of elevated power while the cell temperature rises tolerably, they have an ample operating temperature range (typically – 40 °C to 65 °C) and long life cycle (>1 × 106) [2]. A remaining issue for broader implementation of supercapacitors is their still rather low specific energy (approximately 15-30 times less than an equivalent size lithium-ion battery). Their otherwise outstanding characteristics have brought these devices at the forefront of scientific research with extensive efforts to further improve their energy storage capabilities.

By bridging the gap between batteries and capacitors, supercapacitors present significant longer life cycle and high-power capability on both charge and discharge processes. Scientific efforts to improve the low specific energy move towards development of hybrid supercapacitors, employing materials at electrode level that simultaneously combine two kinds of energy storage, i.e. non-faradic charge as classic Electric Double Layer Capacitors (EDLC) capacitors and faradaic more battery-like processes. That is, hybridization of supercapacitor banks with Li-Ion batteries [3], which is used in
industry in order to optimise the energy storage capability.

OVERVIEW OF SUPERCAPACITOR FOR SPACE APPLICATIONS