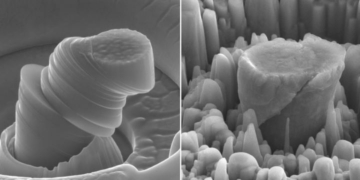 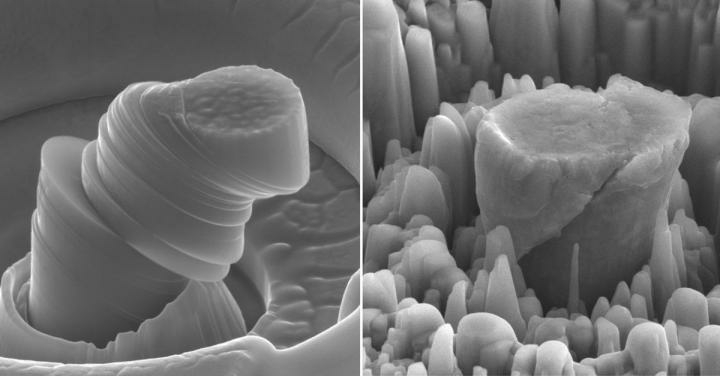 A team led by researchers from the UCLA Henry Samueli School of Engineering and Applied Science has created a super-strong yet light structural metal with extremely high specific strength and modulus, or stiffness-to-weight ratio. The new metal is composed of magnesium infused with a dense and even dispersal of ceramic silicon carbide nanoparticles. It could be used to make lighter airplanes, spacecraft, and cars, helping to improve fuel efficiency, as well as in mobile electronics and biomedical devices.

To create the super-strong but lightweight metal, the team found a new way to disperse and stabilize nanoparticles in molten metals. They also developed a scalable manufacturing method that could pave the way for more high-performance lightweight metals. The research was published today in Nature.

“It’s been proposed that nanoparticles could really enhance the strength of metals without damaging their plasticity, especially light metals like magnesium, but no groups have been able to disperse ceramic nanoparticles in molten metals until now,” said Xiaochun Li, the principal investigator on the research and Raytheon Chair in Manufacturing Engineering at UCLA. “With an infusion of physics and materials processing, our method paves a new way to enhance the performance of many different kinds of metals by evenly infusing dense nanoparticles to enhance the performance of metals to meet energy and sustainability challenges in today’s society.”

Structural metals are load-bearing metals; they are used in buildings and vehicles. Magnesium, at just two-thirds the density of aluminum, is the lightest structural metal. Silicon carbide is an ultra-hard ceramic commonly used in industrial cutting blades. The researchers’ technique of infusing a large number of silicon carbide particles smaller than 100 nanometers into magnesium added significant strength, stiffness, plasticity and durability under high temperatures.

The researchers’ new silicon carbide-infused magnesium demonstrated record levels of specific strength — how much weight a material can withstand before breaking — and specific modulus — the material’s stiffness-to-weight ratio. It also showed superior stability at high temperatures.

Ceramic particles have long been considered as a potential way to make metals stronger. However, with microscale ceramic particles, the infusion process results in a loss of plasticity.

Nanoscale particles, by contrast, can enhance strength while maintaining or even improving metals’ plasticity. But nanoscale ceramic particles tend to clump together rather than dispersing evenly, due to the tendency of small particles to attract one other.

To counteract this issue, researchers dispersed the particles into a molten magnesium zinc alloy. The newly discovered nanoparticle dispersion relies on the kinetic energy in the particles’ movement. This stabilizes the particles’ dispersion and prevents clumping.

To further enhance the new metal’s strength, the researchers used a technique called high-pressure torsion to compress it.

“The results we obtained so far are just scratching the surface of the hidden treasure for a new class of metals with revolutionary properties and functionalities,” Li said.

The new metal (more accurately called a metal nanocomposite) is about 14 percent silicon carbide nanoparticles and 86 percent magnesium. The researchers noted that magnesium is an abundant resource and that scaling up its use would not cause environmental damage.

featured picture: At left, a deformed sample of pure metal; at right, the strong new metal made of magnesium with silicon carbide nanoparticles. Each central micropillar is about 4 micrometers across.