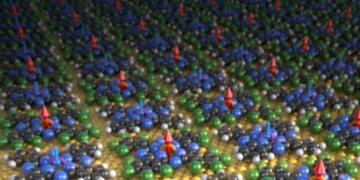 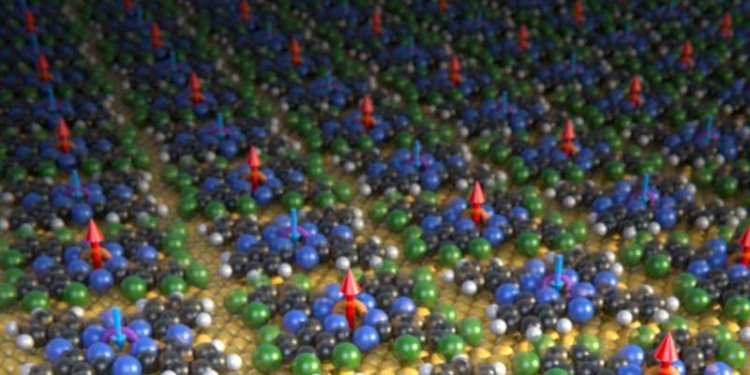 Achieving magnetic order in low-dimensional systems consisting of only one or two dimensions has been a research goal for some time. In a new study published in the journal Nature Communications, Uppsala researchers show that magnetic order can be created in a two-dimensional chessboard lattice consisting of organometallic molecules that are only one atomic layer thick.

Magnetic order is a common phenomenon in three-dimensional materials, such as ferromagnetic order in iron bar magnets, where the magnetic moments on all iron atoms point in the same direction. In one or two dimensions, long-range magnetic order at temperatures higher than zero is not possible, however, according to the Mermin-Wagner theorem. A possibility to achieve a magnetic phase without such long-range order was suggested by Kosterlitz and Thouless (Nobel Prize 2016), who predicted that a topological magnetic vortex in which the magnetic moments point in different directions and compensate each other could be realizable in a two-dimensional film.

Researchers Ehesan Ali and Peter Oppeneer from Uppsala University have now shown in an international collaboration with researchers from Switzerland and India that long-range magnetic order can be created in specially designed molecular systems consisting of iron and manganese phthalocyanine molecules. These molecules, which have great similarities to the iron porphyrins that are found in natural blood, were adsorbed on a gold metal surface. The molecules do not react with gold atoms, but instead order themselves in a two-dimensional chessboard pattern consisting of alternating iron and manganese-based molecules. In this two-dimensional molecule lattice, the researchers could demonstrate magnetic order at low temperatures of just a few degrees Kelvin.

Through large-scale computer simulations, the Uppsala researchers were able to demonstrate a weak interaction between magnetic moments on the neighbouring molecule, which were transmitted through the gold electrons, the so-called Ruderman-Kittel-Kasuya-Yosida (RKKY) interaction. Although the metal phthalocyanine molecules do not react chemically with the noble metal gold, the gold’s electrons sense the spin magnetic moments on the molecule and transmit this information to the neighbouring molecule.

The researchers also detected that another fundamental physical interaction, the Kondo screening, counteracted the magnetic order. This occurred because the gold electrons changed their spin magnetic moments to neutralize the molecule’s moment, something they didn’t quite succeed in, and therefore long-range magnetic order was formed.

“It was amazing that our careful calculations could establish how magnetic order is formed in the molecular layer,” says Peter Oppeneer, Professor at the Department of Physics and Astronomy at Uppsala University. “Our discovery can pave the way for studying thus far unknown quantum magnetic states, and contributes to the realization of molecular quantum spintronics.”

Phthalocyanines with iron (orange) and manganese (violet) centers co-assemble on a gold surface into a checkerboard pattern. The magnetism of iron and manganese differs in strength and points in opposite directions (red and blue arrows), fulfilling the prerequisites for extremely, atomically thin ferrimagnets. Credit: University of Basel, Department of Physics