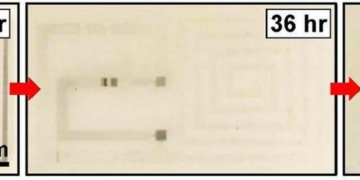 (Tech Xplore)—A team of researchers from the U.S. and China has demonstrated electronic devices that can degrade and disappear on demand using nothing but moisture in the air. In their paper published on the open access site Science Advances, the team describes their devices and offers ideas on applications that could benefit from them.

Most people know that electronic devices do not work particularly well in humid conditions—if your house is humid all the time, your desktop computer will not last very long, for example. This is because parts of the electronics fall prey to oxidation. In this new effort, the researchers took this knowledge to the extreme by building electronic devices from materials that degrade much faster than normal under humid conditions—so fast that the devices can actually disappear. They rely on a slightly different process—hydrolysis, which works due to the activation of corrosive acids in the materials used.

Explored illustration of integrated electronics that includes a transistor, a diode, a memory, a capacitor, an antenna, and a resistor, with interconnects and dielectrics on a moisture-sensitive degradable polymer substrate. The inset in the lower right of the figure shows the top view (left). Optical image of the circuit fabricated on the substrate (right). Credit: Gao et al., Sci. Adv. 2017;3: e1701222

Researchers have previously made other such devices, known collectively as transient electronics, but they only operated in aqueous solutions and were degraded by water molecules. To achieve roughly the same effect, the researchers searched for and found a material that is already known to degrade in humid environments—the polymer polyanhydride. The team integrated the polymer with electronic components by applying it in thin films.

Optical images showing the time-sequential dissolution of the device under 75% relative humidity. Credit: Gao et al., Sci. Adv. 2017;3: e1701222
The team reports that the films allow the components to operate normally until humidity is applied. The time frame for degradation can be varied, allowing manufacturers to pre-program self-destructing components on demand—from days to weeks, or indefinitely in some applications. To prove the concept viable, the team constructed (and dissolved) several types of devices such as resistors, capacitors, transistors and even optoelectronics and diodes.

Devices that could degrade on demand would be useful in security applications, of course, but they might also be used to reduce the number of electronic components that pollute the environment—at the end of their useful life, users could simply expose them to high humidity levels. The researchers suggest that they might also be used for medical implants and other types of sensors, as well. 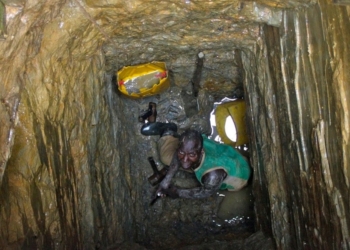 Reliability and MTBF: We think we know what we mean, but do we? 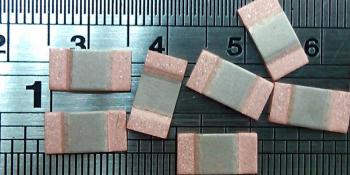