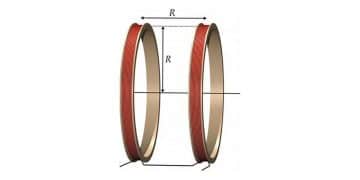 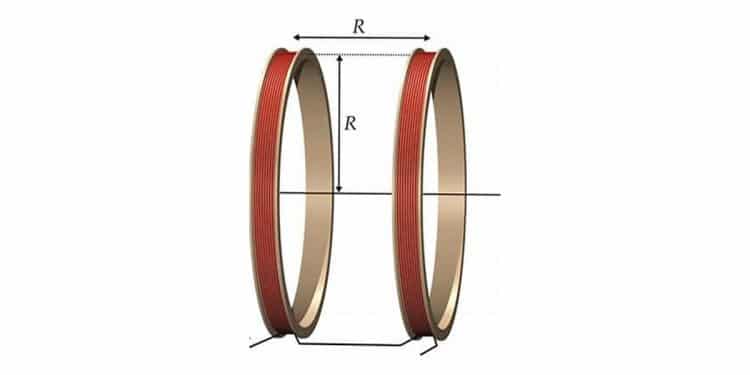 Helmholtz coils, named after the German physicist Hermann von Helmholtz, is consisted of two identical electromagnetic coils place in parallel and aligned their centers in the same axis like a mirror image as shown in Figure 1. When electrical current pass through the high frequency Helmholtz coils in the same direction, it creates a highly uniform magnetic field in a 3-dimension volume of space inside the coils. These Helmholtz coils are often used for cancel background (earth’s) magnetic field, measurements and calibration, and magnetic field for susceptibility testing of electronic equipment.

If the Helmholtz coil operating frequency is close enough to its self-resonant frequency, the circuit model must also include its parasitic capacitances (CP1 and CP2). The parasitic capacitors are parallel to each inductor and resistor in series as shown in Figure 3.

High frequency Helmholtz coils may be connected in series (Figure 2) or in parallel as shown in Figure 4. Series connection allows the same electrical current flow through the two magnetic coils. Generally series connection enables the highest current and thus highest magnetic field. However, because two coils are in series, the total impedance is also double. Higher impedance may require higher driver amplifier voltage. If used resonant techniques described below, the impedance is reduced.

The advantage of parallel Helmholtz coil connection is lower impedance. In fact the impedance is cut in half, but the current is also cut in half (current is split into two). Thus lower the magnetic field. Parallel connection is acceptable if the required magnetic field density is achieved at half the current and low impedance is required such as the case of low-voltage amplifier driver. More details on Helmholtz coil impedance below in the Direct Drive Method section.

If the experiment is low frequency or the coils are low inductance or both, the Helmholtz coils may be driven directly using a waveform amplifier driver such as the TS250 Waveform Amplifier from Accel Instruments. Because of low frequency or low inductance, the coil’s impedance is low enough it can be driven by an amplifier directly as shown in Figure 5 and Figure 6.

Use the Equation-1 to calculate the coil current for a desired magnetic field. Then use Equation-2 to calculate the maximum voltage is needed. Note the small parasitic resistance is ignored. The maximum voltage is when the current and frequency are both at maximum. The next step is to drive the Helmholtz coils with a high-current and high-frequency amplifier driver such as the TS250 function generator amplifier.

To achieve high-current and high-frequency electromagnetic field, series resonant technique can be recommended.

Only the inductor’s parasitic resistance remained. With only resistance remained, the function generator amplifier (TS250) can drive high current through the Helmholtz coils (LCR circuit) even at high frequency. This method enables the signal amplifier to drive high current through the high frequency coils, but it can only operate at a very narrow frequency range near resonance. The disadvantage of resonant technique is that you need to change the capacitance when you change the frequency.

The series-resonant frequency of the Helmholtz coils is given in Equation-3. The series capacitance, CS, is calculated using Equation-4. The voltage across the series capacitor is given in Equation-2 above. At high frequency and high current, the voltage could be in the thousands volts. For example, at 200kHz and 1A current though a 2mH high frequency Helmholtz coils, the voltage across the capacitor is 2512V! The capacitor must be rated for at least that voltage.

High-current Helmholtz (electromagnetic) coils discussed above can store enough energy to become an electrical shock hazard. Make sure all electrical connections are insulated with high-voltage insulators. Wires must be rated for voltages rating discussed above. Always disable the waveform amplifier output before connecting or disconnecting the coil and capacitor.

Another resonant that is even more powerful than the series resonant is called the current-amplifier resonant. This newly discovered resonant can boost the Helmholtz coils current by a factor of two. That is the coil current is twice the source amplifier driver current. Hence the resonant is magnifying current and the magnetic field. Detail information of this newly discovered resonant can be found in the application note High Frequency Magnetic Field Generator.

The resonant frequency is expressed in Equation-6. The two capacitor values are calculated in Equation-8. At resonant, the Helmholtz coils impedance is resistive and 4 times the coils parasitic resistance. It is desirable to design low resistance coils when used in the current-amplified resonant. Also keep in mind the magnetic coil’s AC resistance is higher than DC due to the skin-effect.