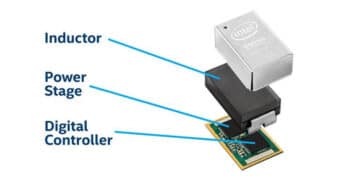 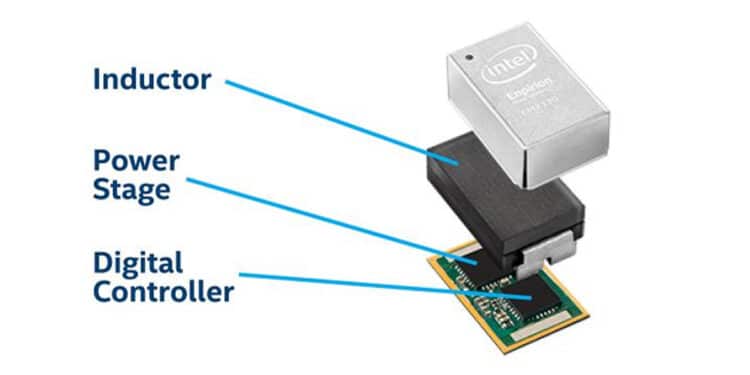 Intel Enpirion PowerSoC modules are DC-DC step-down converters that integrate nearly all the components needed to build a power supply without sacrificing performance or efficiency. These solutions are designed to meet strict FPGA, ASIC, and processor power requirements.

A DC-DC step-down power converter can be designed in several configurations, ranging from discrete to modular architectures depending on the level of integration. As shown in Figure 1, the primary elements of a step-down DC-DC converter include the gate drive circuity, power inductor, output voltage feedback loop, and control circuitry. These components can be integrated at various levels to create different power management devices.

There are many ways that power companies integrate these elements to create different semiconductor devices. These devices can remain completely (100%) discrete, consisting of a standalone controller, standalone power stage, inductor, and passive components. These components can also be fashioned into a regulator, a slightly more integrated device, consisting of an integrated controller and power stage with an external inductor and passive devices.

Both fully and partially discrete power management solutions have some external components. The architectures of both options can be difficult to design in, particularly for non-power experts, as control loop compensation and stability analysis can be challenging. Additionally, the inductor is one of the largest components in the converter, so placing it externally dramatically increases the total solution size. However, one of the benefits of designing with a partially discrete architecture is that they offer a balance of integration and flexibility.

Thermal de-rating is when a power converter cannot deliver the full rated output current at high temperatures due to silicon and device design limitations without risking damage. For example, if a customer needs to use a device near peak output current and their system needs to operate above ~45°C, they may need to use a larger power supply to reach sufficient current.

Because of PowerSoC’s high level of integration, including inductor integration, they require a much smaller PCB (printed circuit board). In contrast, discrete power solutions can take up to 7x more area than an Intel PowerSoC. This small footprint allows system designers to reduce the size of their system PCB and save on cost. Designers may even be able to move to a smaller form factor.

In addition, a 16-layer printed circuit board with blind and buried vias, as required by many advanced systems today, costs approximately $15 per square inch (2.3 cents per square millimeter) – so saving even a small amount of space delivers meaningful cost reductions. Designers can also take advantage of the extra PCB space by adding features or additional components to make the end solution more competitive.

Ripple, or conducted electrical noise, is the small, unwanted variation on Vout due to energy transfers during the on/off cycles of any switching converter. Ripple can conduct through the PCB and cause unwanted behavior, such as jitter or signal traces, which is particularly detrimental for noise sensitive circuits (eg SERDES). Ripple is largely generated by design choices regarding switching frequency and the parasitic capacitance and inductance. Intel Enpirion PowerSoCs feature high switching frequencies and high integration to minimize parasitic capacitance and inductance, enabling Enpirion devices to have very low ripple – less than 10 mV for most devices.

EMI, or electromagnetic noise, originates from high rates of current changes (di/dt) flowing in loops, creating a loop antenna. EMI can cause unwanted behavior such as data or audio interference, or even violate regulatory limits set by the FCC. Radiated power is proportional to the radius of the current loop and decreases by r^8. PowerSoCs have current loops with a much smaller radius, r, than discrete solutions, ensuring the radiated power is significantly lower.

A key measure of system reliability and robustness is the Failures in Time rate, or FIT rate.

One FIT = One failure per billion hours, so lower FIT rates are better.

Discrete power solutions, by definition, are numerous components from multiple vendors assembled by a system designer. While each semiconductor and passive component is tested by the manufacturer, the total reliability of the complete discrete power solution depends entirely on how the system is designed, and what components are selected.

In contrast, Intel PowerSoCs integrate most key components needed in a step-down converter. This essentially complete power supply system, in an integrated circuit package, is validated by the supply manufacturer as a total solution, ensuring that PowerSoCs will have lower FIT rates.

While PowerSoCs tend to have less design flexibility and can be more costly than fully or partially discrete solutions, it is important to understand the total value of a power module. To do so, designers must understand the total cost they pay for when using a power module versus a discrete power solution. When discussing pricing, consideration of the additional design, testing, and validation time should be evaluated.

Ultimately, the net development cost to design a discrete power supply is often higher than the development cost for designing with a PowerSoC, which should be considered when choosing your power management solution. This means that Intel Enpirion PowerSoCs may be cheaper for customers in low to mid-range volumes, where Intel offers the best balance of performance value and ASP.