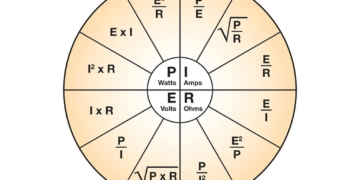 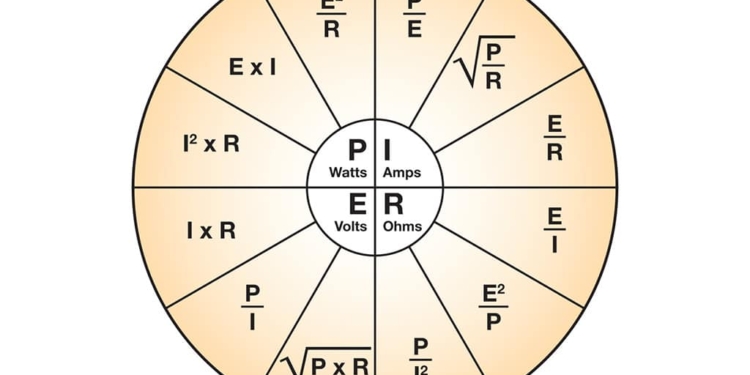 Understanding these concepts will help you solve more than theoretical problems. Understanding electronics, electronic components, resistors and electronic troubleshooting starts with knowing Ohm’s Law. This is not difficult and can make your work so much easier.

Ohm’s Law was a constant companion over my long career as a radio broadcast engineer. The relationships among volts, amperes, ohms and power made it all so understandable.

German physicist Georg Ohm published the concept in 1827, almost 200 years ago. It was later recognized as Ohm’s Law and has been described as the most important early quantitative description of the physics of electricity.

Featured image Fig. 1 above is a list of simple formulas for using Ohm’s Law. Nothing complicated, just good answers to your questions. You don’t need to be a mathematician to run the calculations. The calculator on your smartphone will handle this easily.

P is for power in watts, I is current in amperes, R is resistance in ohms and E is voltage in volts. Solve for any of those knowing two of the other parameters.

The rule here says you don’t put more than an 80-percent load on any circuit breaker for fuse, which is 14 lamps in this case. Always keep some headroom in a circuit. As you know, breakers and fuses are used to protect against fires or other dramatic failures during circuit problems. They get unreliable at their current limit. You don’t need nuisance break trips or fuse burn-outs from running too close to the line.

There are not many high-level plate modulated AM transmitters around anymore. The Gates BC-1 series is an example of this 1950 to 1970s technology. The design typically has 2600 volts running the RF Power Amplifier tubes.

Ohm’s Law tells us that 2600 volts across the resistor squared (times itself) then divided by 100,000 ohms resistance equals 67.6 watts of power dissipation required on a continuous basis on a 100 watt resistor. You would think that the 32.4-percent safety margin would be enough. This resistor typically failed after 10 years of use. The answer is in the ventilation the resistor gets for cooling. The 67.6 watts in heat has to go somewhere. This transmitter model has some, but not a lot, of air flow on the bottom where the resistor is located.

My answer was to replace the 100 watt resistor with a resistor rated at 225 watts, as seen in the center of the photo. It gave more surface area so it ran cooler, thus longer. A 100 watt resistor is $15.14 vs $18.64 for a 225 watt unit. It is only a $3.50 difference for a huge increase in reliability and safety. The screw that holds it in place will need to be longer if you do this modification. No big deal.

Yes, there is a meter multiplier resistor string next to the resistor and high-voltage capacitor. It samples the high voltage for the PA voltmeter. Dirt has accumulated on the high-voltage end of the string. It is high voltage that attracts dirt, requiring frequent cleaning to maintain transmitter reliability. It’s maintenance.

Let’s say we know that 2 amperes of current is going into a 100 ohm resistor. What is the voltage across the resistor?

Be sure to check the manufacturer’s data sheets for exact numbers for each transmitter model.

Half power doesn’t mean the transmitter’s PA voltage is half. If it was half, then the PA current would be half and RF output would be one-quarter. You’ll remember when local Class 4 (now Class C) AM stations ran 1000 watts day and 250 watts at night.

A Gates BC-1 transmitter might have 2600 PA volts and 0.51 amperes of PA current during the day. We can determine the resistance of the power amplifier by taking the PA voltage of 2600 and dividing it by PA current of 0.51 amperes. The answer is 5098 ohms.

That same PA resistance applies regardless of the power level of this transmitter. At quarter power, the PA voltage is 1300 volts. Ohm’s law, using the same 5098 ohms, tells us that the PA current should be 0.255 amperes. Yes, it worked out that way in practice. The simple trick was to connect 120 VAC to the primary of the transmitter’s high voltage transformer for night operation in place of 240 VAC in the day.

With quarter power, the antenna ammeter read half and the signal field intensity was half, not one-quarter. Let’s examine this. If you have a 50 ohm antenna and 1000 watts of power, what is the antenna current? Using Ohm’s Law, take 1000 watts divided by 50 ohms = 20. The square root of that is 4.47 amperes. Divide 250 watts by the same 50 ohm antenna resistance and you get 5. The square root of that is 2.236 amperes, half of the day antenna current. It’s Ohm’s Law.

Think Ohm’s Law when you are on the job. It answers your questions and makes perfect sense.

About author: Mark Persons, WØMH, is an SBE Certified Professional Broadcast Engineer; he was named the Robert W. Flanders SBE Engineer of the Year for 2018. Mark is now retired after more than 40 years in business.