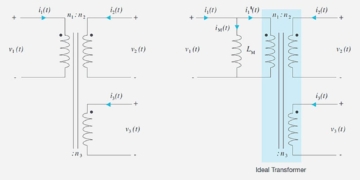 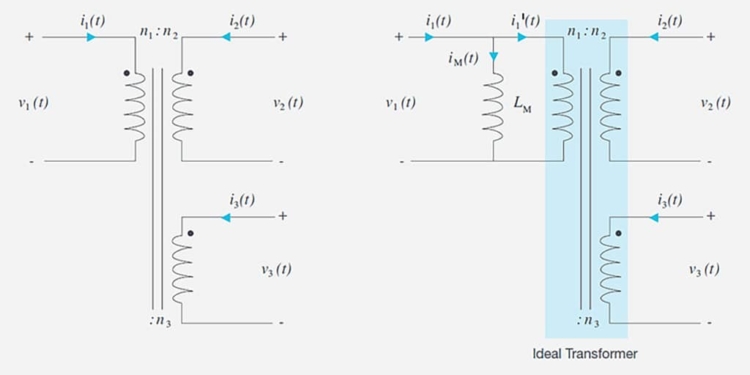 In switched-mode power supplies (SMPS), magnetic components, namely inductors and transformers, play critical roles. Much of the SMPS design process relies on component specifications and simulation models. However, due to actual signal conditions, parasitics, temperature, and other environmental factors affecting magnetic components’ performance, a power supply may not perform exactly as predicted by specs and simulations. As a result, in-circuit measurements of inductors and transformers under operating conditions are critical to ensuring reliable real-world performance.

With the right tools on hand, making these measurements doesn’t have to be difficult or time-consuming. We’ll first review the basic theory of inductors and transformers, especially as it relates to in-circuit measurements. We’ll then walk through the use of oscilloscope and probes during power-supply operation, and explore the use of induction measurements and B-H curves to gain performance insight.

Faraday’s and Lentz’s laws tell us that the current through an inductor and the voltage across the inductor are related as:

This shows that inductance can be thought of as the extent to which a changing current results in an opposing voltage. By integrating, rearranging, and ignoring the sign, we can get:

This reveals that inductance may be determined as a function of voltage and current over time. Such a time-domain measurement is best accomplished using an oscilloscope equipped with a voltage probe, current probe, and the ability to perform integration and plot X versus Y.

In contrast to a theoretical inductor, the inductance value of a real inductor depends on current levels, temperature, and frequency of operation. In a power supply, these characteristics vary in real time with operating conditions.

1. A basic inductor is a coil wound on a closed ferromagnetic core. Current of I amperes flows through the coil, which has N turns. The inductance of the coil describes the relationship between the current flowing in the coil and the magnetic flux.

As an example, the inductance of the toroid in Figure 1 may be approximated by:

Since this number of turns is squared, it’s the biggest contributor to inductance. Furthermore, the permeability of the core material plays a significant role. However, the value of the inductance is also related to the physical size of the component. To minimize the size of the inductor, most inductors in electronics use core materials that have a much higher permeability than air.

In short, the characteristics of the core material and geometry are critical in determining inductance over various operating conditions, as well as power loss in the device.

Power-supply designers typically use simulation techniques to determine the appropriate inductor value for a design. After manufacturing the inductor, a common practice is to verify the inductance using an LCR meter. However, most LCR meters stimulate the component with sinusoids over a narrow frequency range, so while this is a good technique for confirming that the component is roughly the correct value, it’s a poor predicter of in-circuit performance.

The inductance characteristics of an inductor depend on the current and voltage source excitation signal, wave shape, and frequency of operation, which may vary in real-time operating conditions. Therefore, it’s important to measure and observe the behavior of an inductor in the dynamically changing environment of the power supply.

These measurements are made by probing the voltage across the device, usually with a differential voltage probe. A current probe is typically used to measure the current through the magnetic component. To determine inductance, scope-based power-analysis software integrates the voltage over time and divides by the change in current. It also removes any dc offset and uses averaging to calculate the inductance value.

In Figure 2, the inductance measurement gives the average inductance value in henries. The yellow waveform (CH1) is the voltage across the inductor and the blue waveform (CH2) is the current through the inductor. The plot on the left shows current, i versus ∫vdt, the slope of which is inductance.

Figure 3 shows the I vs. ∫V measurement, which provides additional insight on inductor performance. Here you can see any dc bias as it builds up over multiple cycles. The yellow waveform (CH1) is the voltage across the inductor and the blue waveform (CH2) is the current through the inductor.

3. This shows the I vs. ∫V measurement, which provides additional insight on inductor performance. Here you can see any dc bias as it builds up over multiple cycles. The yellow waveform (CH1) is the voltage across the inductor and the blue waveform (CH2) is the current through the inductor.

Magnetic power-supply components are designed for expected operating voltage, current, topology, and the particular type of power converter. The operating regions of inductors and transformers help determine the stability of a SMPS. However, power-supply operating characteristics can vary during power-on, steady-state operation, load changes, and environmental changes, making it extremely difficult to consider all possible scenarios during the design process.

To ensure the stability of the power supply, it’s important to characterize the operating region of a magnetic component in the SMPS. Generally, the goal is to avoid saturation and operate in the linear region of the hysteresis curve. However, it’s extremely difficult to design a magnetic component and ensure that it will operate in a linear region under all conditions.

4. Manufacturers of core material may provide such a hysteresis curve as part of their specifications.

B-H curves like the one shown in Figure 4 help designers visualize the performance of an inductor and its core. In this example, H, measured in A/m, is the magnetizing force in the device. It’s measured in amperes/meter and is proportional to the current:

This curve offers a number of important insights, including:

Indications of potential instability include:

An oscilloscope can be used to perform an in-circuit measurement of voltage across, and current through, the winding of an inductor. Given the number of turns in the device, the magnetic length of the device, and the cross-sectional area of the core, it’s possible to derive the actual B and H values based on real- time voltage and current measurements using an oscilloscope.

To measure the magnetic characteristics of a transformer under operating conditions, care must be taken to account for current being transferred into the secondary. When measuring the B-H curve on a transformer, it’s helpful to consider a theoretical element call the “magnetizing inductor.”

6. In this transformer schematic (left) and equivalent circuit (right), the magnetizing current is flowing through an imaginary inductor, LM, in parallel with the primary. LM models the magnetic characteristics of the transformer.

Losses in magnetic components are significant contributors to overall loss in a power supply. Core loss depends on the magnetic properties of the material and includes hysteresis loss and eddy current loss. Copper loss results from the resistance of the windings; it also depends on the load connected to the secondary side of a transformer.

A number of techniques are used to estimate core loss. One more popular technique is the Steinmetz empirical formula, which relates core loss to frequency and flux density:

where k, a, and b are constants for the core material, generally taken from the core manufacturer’s datasheet. Datasheets may also give loss estimates at various frequencies and flux densities that are typically given in response to sinusoidal excitation. However, in power applications, components are usually driven with non-sinusoidal stimuli, causing uncertainty in such approximations (Fig. 7).