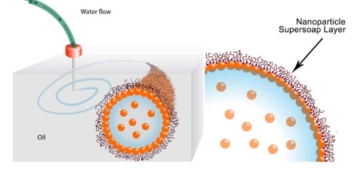 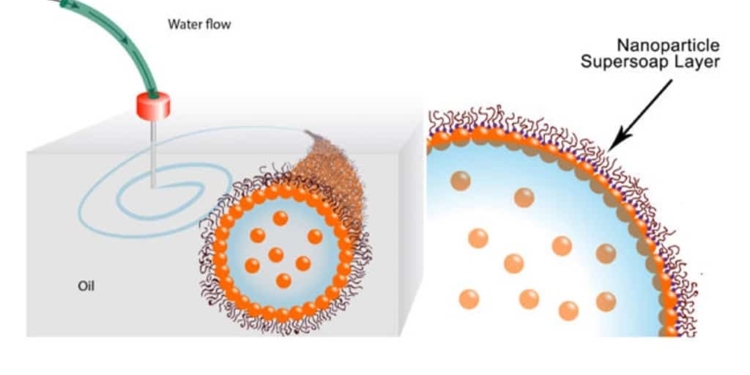 Scientists from the Department of Energy’s Lawrence Berkeley National Laboratory (Berkeley Lab) have developed a way to print 3-D structures composed entirely of liquids. Using a modified 3-D printer, they injected threads of water into silicone oil — sculpting tubes made of one liquid within another liquid.

They envision their all-liquid material could be used to construct liquid electronics that power flexible, stretchable devices. The scientists also foresee chemically tuning the tubes and flowing molecules through them, leading to new ways to separate molecules or precisely deliver nanoscale building blocks to under-construction compounds.

The researchers have printed threads of water between 10 microns and 1 millimeter in diameter, and in a variety of spiraling and branching shapes up to several meters in length. What’s more, the material can conform to its surroundings and repeatedly change shape.

“It’s a new class of material that can reconfigure itself, and it has the potential to be customized into liquid reaction vessels for many uses, from chemical synthesis to ion transport to catalysis,” said Tom Russell, a visiting faculty scientist in Berkeley Lab’s Materials Sciences Division.

He developed the material with Joe Forth, a postdoctoral researcher in the Materials Sciences Division, as well as other scientists from Berkeley Lab and several other institutions. They report their research March 24 in the journal Advanced Materials.

The material owes its origins to two advances: learning how to create liquid tubes inside another liquid, and then automating the process. For the first step, the scientists developed a way to sheathe tubes of water in a special nanoparticle-derived surfactant that locks the water in place.

The ligands were developed with help from Brett Helms at the Molecular Foundry, a DOE Office of Science User Facility located at Berkeley Lab. In practice, soon after the water is injected into the oil, dozens of ligands in the oil attach to individual nanoparticles in the water, forming a nanoparticle supersoap. These supersoaps jam together and vitrify, like glass, which stabilizes the interface between oil and water and locks the liquid structures in position.

Next came automation. Forth modified an off-the-shelf 3-D printer by removing the components designed to print plastic and replacing them with a syringe pump and needle that extrudes liquid. He then programmed the printer to insert the needle into the oil substrate and inject water in a predetermined pattern.

“We can squeeze liquid from a needle, and place threads of water anywhere we want in three dimensions,” said Forth. “We can also ping the material with an external force, which momentarily breaks the supersoap’s stability and changes the shape of the water threads. The structures are endlessly reconfigurable.”

The research was funded by the Department of Energy’s Office of Science.