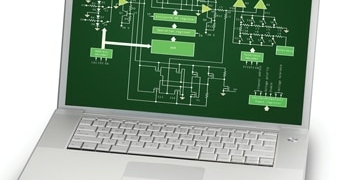 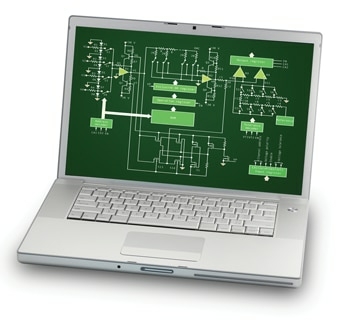 System-level software combines many different types of RF/microwave components (and often digital components) to predict the performance of a high-frequency system.
Achieving target levels of RF/microwave system-level performance requires proper operation of many components and subsystems. Often, degraded performance of just one component, such as excessive phase noise in an oscillator, can hinder the performance of an entire receiver system. Predicting how these different components and subsystems interact is the task of a special kind of computer-aided-engineering (CAE) software program: a system simulator.
Armed with models of the different components that comprise a system, this software can predict system-level behavior even when the phase noise of a receiver’s local oscillator (LO) is too high. Such system simulators have progressed impressively over the years, having now become proven tools for the design and maintenance of the most complex RF/microwave systems. Indeed, a number of high-quality software programs are available commercially to aid system designers.

Simulation software for modeling RF/microwave systems can cover broad applications or can be very specialized–focusing, for example, on modeling the behavior of cellular communications systems. One such systems-level simulator is CellDesigner software from CelPlan Technologies. It enables wireless service providers to optimize the performance of their networks based on customer feedback, as well as to make predictions of three-dimensional (3D) RF/microwave transmission behavior like signal-to-noise-ratio (SNR) performance.The simulator supports all major wireless standards, including wireless backhaul, time-division-duplex (TDD) and frequency-division-duplex (FDD) Long Term Evolution-Advanced (LTE-A), WiMAX, and Wi-Fi communications systems (Fig. 1). It includes an Automatic Frequency Planning (AFP) tool that helps increase network capacity and performance by automatically optimizing handoff thresholds, neighbor lists, and frequency plans. The software can also perform sequential layers of optimization and geographic performance analysis for an entire wireless network. It analyzes and predicts the effects of cellular interference regions and helps optimize network performance.

Another very focused system simulator is the Terrain Analysis Package (TAP) from SoftWright LLC. The software can be used to design signal paths for VHF/UHF and microwave-frequency links alike. It provides line-of-sight analysis in such links, with path-loss calculations and predictions of reliability. The software can be used in a wide range of terrain types, including urban, suburban, and even forest settings.

TAP performs spatial and frequency diversity calculations. The software allows coverage studies for a link, with land use calculations and calculations for the effects of buildings, vehicles, and even railroads. The software is written to model the physical layer for all wireless protocols from 30 MHz to 30 GHz.

Remcom has developed a number of application-specific, system-level software tools based on its expertise in electromagnetic (EM) simulation. The firm recently announced the latest version of its Wireless InSite software, which is a site-specific radio propagation simulator for analyzing the propagation of wireless communications systems (such as radios and links), somewhat similar to the TAP software. The latest version of the software (Release 2.8) allows importing KMZ and COLLADA geometry files for including different types of structures, like buildings and bridges, as part of a radio propagation analysis.

The new version features increased processing speed for shorter-duration analysis of complex urban settings for propagation simulations. As Ruth Belmonte, product manager for Wireless InSite, notes of the new KMZ and COLLADA file capabilities: “These international standard formats are widely supported, and will provide users access to an expanded source of data. They can also be easily displayed in third party GIS tools such as Google Earth.”

System-level simulations are also performed with the aid of mathematical analysis software. Recently, MathWorks introduced a system-level software tool for the simulation and optimization of wireless local area networks (WLANs). The fWLAN System Toolbox software builds upon the firm’s popular MATLAB mathematical software and provides configurable physical-layer waveforms for IEEE 802.11ac and 802.11b/a/g/n WLAN standards. It includes a host of reference designs to simplify the design process, and permits users to study the effects of interference on WLAN system performance.

For full-featured simulations of RF, microwave, and digital systems, along with their components, the Advanced Design System (ADS) software from Keysight Technologies is an example of a highly sophisticated simulation tool that is also relatively easy and straightforward to use. It combines elements of circuit, system, and electromagnetic (EM) simulation programs to model the behavior of many different commercial, industrial, and military electronic systems.

The ADS software’s integrated SystemVue simulation software can generate IC models for high-speed data links as well as for wireless applications. This is a far-reaching software tools that allows users to operate at any stage in the design process, from device- and circuit-level simulations through full system-level simulations of communications channels. It includes RF and digital-signal-processing (DSP) models, as well as links to test-and-measurement instruments for coordination of modeling and measurement functions when simulating a communications channel. It can be used, for example, to analyze and optimize the bit-error-rate (BER) performance of a data link.

2. Spectrasys is an RF/microwave system simulator that explores the effects of RF analog components on high-frequency systems. (Photo courtesy of Keysight Technologies)

In addition, Keysight offers Spectrasys (Fig. 2), an RF/microwave system simulator focused on analyzing high-frequency systems and their problems. It can be used to diagnose RF analog effects within a system, such as sources of spurious signals or interference, and develop solutions. It accounts for different RF/microwave effects within a system while providing a user with a graphical view of the entire system’s performance.As with other system simulation tools, it is designed to save time during the early phases of system design, in terms of determining required frequency range, bandwidth, transmit and receive power levels, harmonics, spurious, and other performance parameters. The software has been used in the simulation of systems across a wide range of applications, from wireless base stations to military radar systems, and even in medical RF/microwave electronic systems.

Another full-featured software design environment that provides system-level simulation is the ANSYS Simplorer from ANSYS. The firm, known for its ANSYS HFSS 3D EM simulation software for circuit design, also offers this software tool for modeling, analyzing, and simulating virtual system prototypes. It can design and optimize system designs containing analog, digital, and RF/microwave circuitry, and can integrate with ANSYS HFSS for detailed analysis of circuit structures within a system.

The Visual System Simulator (VSS) from NI/AWR, which is compatible with the firm’s popular LabVIEW test software for ease of validating a software simulation with measurement data, is an effective system-level simulator reinforced by a wealth of measurement-based models. To list some examples, it contains a radar-cross-section (CS) model, a phased-array-element antenna model, Doppler and clutter channel models, and a range of signal processing and antenna models. It includes many built-in functions to simplify a system simulation, including signal processing blocks for a moving target detector (MTD), a moving target indicator (MTI), and for constant false alarm rate (CFAR) analysis.

The company offers a number of different versions of the VSS software, tailored for different applications, such as radar systems, Long-Term-Evolution (LTE) communications systems, and wireless networks. The VSS software tools provide seamless integration with the firm’s popular Microwave Office suite of circuit-level design tools for “top-to-bottom” analysis and simulation of an RF/microwave system design. 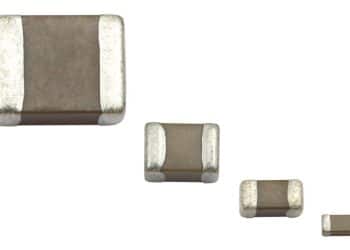 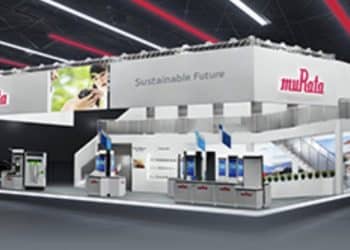 Murata to Show Attention-Grabbing Demos at its Electronica Stand