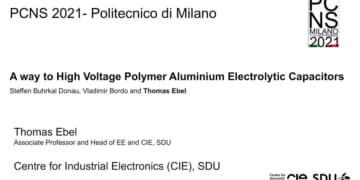 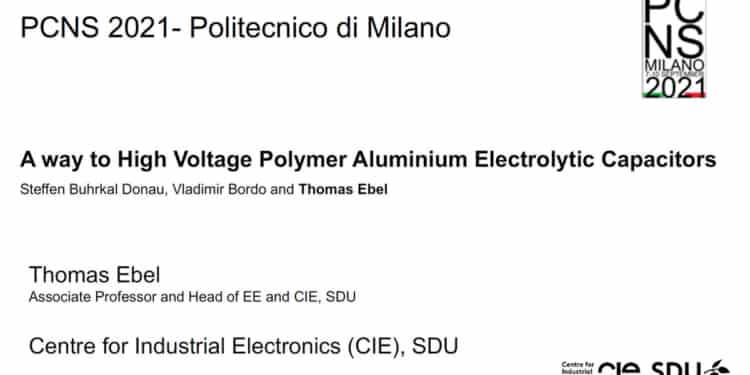 High voltage Aluminium electrolytic capacitors with working voltages UR > 400 V are the backbone of industrial and automotive electronics. The main application is in the DC-link circuit. The advantage of those capacitors are lower cost compared to other capacitor types, a high CV product and a better cool-ability.

The paper was presented by Thomas Ebel, Centre for Industrial Electronics, Department of Mechanical and Electrical Engineering, University of Southern Denmark, Sønderborg, Denmark at the 3rd PCNS 7-10th September 2021, Milano, Italy as paper No.5.4. and voted by attendees as:

During the last decade wide band gap power semiconductors have become more mature and are now an interesting alternative for silicon-based power semiconductors in automotive applications, since they have the potential to significantly increase the power density of the converters [10,11]. This could be achieved by higher switching frequencies typically leading to smaller passive devices and by higher operating temperatures leading to smaller heat sinks [12, 13].

To understand how high voltage polymer capacitors could work the breakdown mechanism at the anodic oxide layers must be understood. Fig.1 shows the principal construction  of a high voltage (U > 400 V) Aluminium electrolytic capacitors with liquid or polymer electrolyte. Highly etched anode foils are stacked or wounded with thinner cathode foils, separated by capacitor paper.

Such winding elements for high voltage use are usually impregnated with liquid electrolytes based on mixtures of glycols with inorganic and organic acid salts with ammonia and additives [14].

Recently it was reported that the use of nano dispersed PEDOT-PSS particles could improve the breakdown voltage a lot compared to in situ polymerized versions [5].

The authors have principally investigated the physical fundamentals of breakdown [15] which are summarized  here.

where A is the surface number density of the anions adsorbed at the electrode and C is the volume number density of the same anions in the bulk electrolyte. The latter quantity in turn determines the electrolyte conductivity. Here a is an empirical constant and b is the adsorption exponent which may have any value between 0.1 and 0.7, depending on the concentration and the nature of the solute.

The theory of electrical breakdown in barrier anodic films in contact with an electrolyte  allows one to consistently describe this phenomenon. The main points of this new theory are summarized in [15].

To compare the electrical properties of polymer impregnated and liquid electrolyte impregnated capacitors stack model based capacitors were build (fig. 2) based on the principal construction described in fig. 1.

The obtained results of the measurements are summarized in table 1 and Fig. 4.

A new breakdown model was presented. In case of conduction polymer anodic oxide interfaces the situation seems to be very different respect to liquid electrolytes, because smaller ions which could be incorporated into the oxide during the anodization process are missing here and could not serve anymore as sources of the injection current. Therefore, the breakdown model for conduction polymer anodic oxide interfaces must be elaborated more in detail.

The measured data of model capacitors shows that polymer electrolytic capacitors indicate a significant better ESR -temperature and frequency behaviour compared to classical liquid electrolyse. Up to factor of 9 lower ESR values could be obtained. That means, that nine times higher ripple current loads at the same thermal loss could be expected. Such capacitors could also actively be cooled which is a significant advantage vs. metallized film capacitors.

The high frequency behaviour over 20 kHz and the high temperature stability over 125°C makes them best candidates for the application together with the new wide band gap semiconductor like GaN or SiC switching devices.

The temperature dependence of the ESR of the polymer electrolytes is very little compared to liquid electrolytes [1].

However, in particular the leakage current behaviour, vibration resistivity, breakdown behaviour and endurance behaviour must still be investigated in more detail.