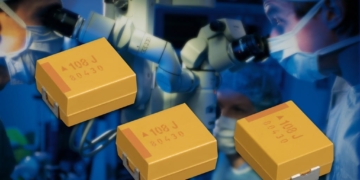 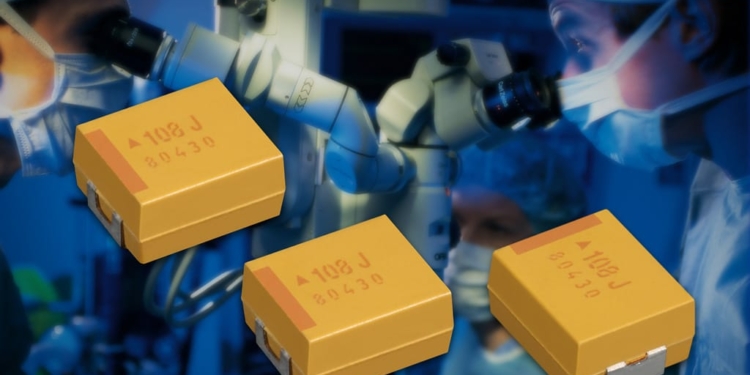 Capacitors are essential components in a wide range of electronic systems including smart phones, household electric appliances, electric vehicles, and medical devices to name a few. Capacitors for use in life-supporting and non-life-supporting medical devices are required to have high reliability, and they are taken through stringent screening checks. Moreover, unlike capacitors for use in consumer electronics, these components have special evaluation criteria and service life requirements.

Capacitors for use in implantable medical devices

There are a wide range of implantable medical devices used in today’s treatment procedures. These devices include artificial cochlea, cardioverters, defibrillators, insulin pumps, gastric stimulators, neuro-stimulators and pacemakers. Since implantable medical devices are embedded in the body of a patient, it is necessary to ensure that they have insignificant side effects on a person.

Solid tantalum capacitors are widely used in the electronic circuits for both life-supporting and non-life-supporting devices. The popularity of these capacitors is mainly due to their impressive self-healing capability and inherent reliability. In addition, due to the high volumetric efficiency of these capacitors, it is possible to produce components with high capacitance values in small case sizes. Furthermore, unlike most types of capacitors, solid tantalum capacitors do not have any known wear-out mechanism.

Apart from tantalum capacitors, multilayer ceramic (MLCC) capacitors are also commonly used in implantable medical devices. MLCC capacitors that are designed for critical medical applications are usually compact in size and offer high reliability and large capacity. Use of compact components allows realization of high-density implantable devices with little or negligible effect on a patient’s body.

Capacitors for use in non-implantable medical devices

This class of capacitors consists of components that are designed for non-critical medical applications. These capacitors are used in various devices including diagnostic imaging equipment such as X-Ray units, and CT and MRI scanners. Capacitors that are designed for use in portable and wearable devices such as electro cardiograms, ultrasonic echo devices, and blood gas analyzers are also in this category.

The two types of capacitors that are commonly used in non-implantable medical devices are tantalum and multilayer ceramic capacitors, however high reliability series film and aluminum capacitors are also often used in applications such as stationary AED or support instrumentation. Unlike standard commercial grade capacitors, these components are usually taken through special screening process to achieve the required high reliability.

Most electronic components, capacitors included, are not immune to failure. Most failures are caused by internal defects such as cracks and voids that occur during production. In many cases, these internal flaws cause high leakage current. At first, the effects of these flaws may be unnoticeable. Product assembly, thermomechanical stress, and use of a device are some of the factors that can accelerate growth of these defects.

Manufacturing-induced flaws and presence of impurities can significantly affect the performance of a solid tantalum capacitor. These defects can result in parametric leakage instability, increased leakage current or even catastrophic dielectric breakdown. These defects can be prevented by using strict material and process controls and thorough testing.

When a component fails, it can, for instance, drain the source of power of a medical device resulting in its premature failure. To avoid such failures, it is necessary to ensure that the reliability of capacitors used in medical applications is assured. Proper failure analysis of any component issues is paramount in any medical application.

For tantalum capacitors, the DC leakage current (DCL) is one of the most important electrical parameters to consider when assessing the reliability of a component. This parameter determines the battery life of a device and lowering it helps to boost the overall reliability of a component. Solid tantalum capacitors are usually subjected to leakage tests at multiple temperatures.

The steps and procedure used in the manufacturing and screening of multilayer ceramic capacitors for use in medical applications is considerably different from the methodology used when manufacturing components for use in consumer electronics. To ensure that the failure rate of these capacitors is lower, they are usually subjected to stringent testing and screening processes.

Unlike standard commercial grade capacitors, components for use in medical applications have strict change control requirements. For medical-grade capacitors, changes in raw materials, design, or any other aspect require customer approval. Such changes are also required to meet the stringent requirements of regulatory agencies such as FDA.

Capacitor manufacturers use various electrical tests to assess the performance of components. Some of the most common electrical tests include automated high-speed parametric test and temperature coefficient of capacitance. For reliability assessment, other common methods include Air-to-Air Thermal Cycling Test, Highly Accelerated Life Test, and Voltage Breakdown (VBD) Test. Additionally, most capacitor manufacturers use cross section analysis to verify absence of construction-related anomalies in components.